Crowd-Funding in the Civil War: Philadelphia and the Great Central Fair

Crowd-Funding in the Civil War: Philadelphia and the Great Central Fair 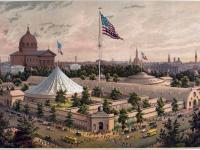 The Historical Society of Pennsylvania (HSP) will commemorate the 150th anniversary of the Great Central Fair with a special document display exploring Philadelphia's patriotic philanthropy.

About the Great Central Fair

In the summer of 1864—150 years ago—Philadelphia hosted the Great Central Fair in what is now Logan Circle, positioning the city as a vital contributor to the Union war effort during the American Civil War.

The civilian-led U.S. Sanitary Commission, a precursor to the Red Cross founded in 1861, organized “sanitary fairs” across northern Free states to help support the sick and wounded soldiers of the Union army.

Prior to the ubiquitous censoring of letters in the latter stages of the war, many soldiers wrote to their families and friends of the squalid and septic conditions of camp life. In an era predating the discoveries of bacteria and germs, a soldier faced as many microscopic dangers in a crowded camp or hospital ward as they did ballistic hazards on a battlefield.

Philadelphians decided to do something about this.

Philadelphia’s Great Central Fair followed the success of similar expositions in Boston, Chicago, and Cincinnati. A civilian grassroots effort, the Great Central Fair allowed those unable to participate directly in the war to support the Union cause. Philadelphians from all over the city — white and black, men and women, schoolchildren to tycoons — donated their time and energy to raise money and coordinate activities.

The Fair featured displays of art – such as John Vanderlyne’s Ariadne Asleep on the Island of Naxos, one of the first nudes to be exhibited in the US, and included a visit by President Abraham Lincoln and his Secretary of State, William Seward.

Raising over $1 million for Union soldiers, the Great Central Fair was one of the grandest and most successful sanitary fairs – second only to New York. Donations both large and small were contributed by schoolchildren to the wealthiest Philadelphians.

Donations were not exclusively in the form of money, however. Wealthy citizens donated items from their private art and history collections, women donated clothing and food, and men donated labor.

About the Document Display

The Historical Society of Pennsylvania (HSP) will commemorate the 150th anniversary of the Great Central Fair with a special document display featuring items from several of its collections that explore the patriotic volunteerism and philanthropy exhibited by all Philadelphians.

The display, titled “Crowd-Funding in the Civil War: Philadelphia and the Great Central Fair”, opens August 19 and continues through September 12.

Visitors to HSP will be able to view dozens of original items, including a copy of the Emancipation Proclamation signed by Abraham Lincoln and sold for $10 at the Fair.

The display is free and open to the public during regular library hours.

Media are welcome to attend. For high-resolution images suitable for publication, to arrange interviews, or for more information about “Crowd-Funding in the Civil War: Philadelphia and the Great Central Fair”, please contact Vincent Fraley, Communications Manager, at 215-732-6200 ext. 233 or vfraley@hsp.org.

Founded in 1824, the Historical Society of Pennsylvania is one of the oldest historical societies and one of the largest family history libraries in the nation. Following a complete merger with the Balch Institute for Ethnic Studies in 2002, HSP is also a leading repository of immigrant and ethnic history. It is second only to the Library of Congress for material on the nation’s founding and is one of the country’s most comprehensive centers for genealogical study.