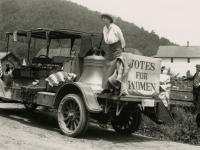 Several of the country’s most significant documents will get new life and increased visibility thanks to a joint effort between the Historical Society of Pennsylvania and Bank of America.

Titled “Preserving American Freedom,” the project will transcribe and annotate historic documents, including a handwritten draft of the U.S. Constitution, to allow for more sophisticated searching and analysis. The documents will reside on an enhanced Historical Society of Pennsylvania (HSP) digital portal and will be accompanied by resources for K-12 educators and linked to numerous other related documents, photographs and collection materials that the Society is making widely available for the first time.  The project is being funded by a grant from Bank of America.

“These documents have had a significant impact on the development of America. We need to be reminded of where we have come from,” said Kim Sajet, president and CEO of the Historical Society of Pennsylvania. “Thanks to Bank of America, we are reminding entirely new generations about the struggle for freedom. History is impacting contemporary thought all over again.”

Documents that are part of Preserving American Freedom include:

·         A “Declaration of Liberty” written by Owen Brown, son of abolitionist John Brown

·         Letters from the Iwata family, held in an internment camp during World War II

“Bank of America is committed to a diverse program of cultural support which is designed to strengthen institutions, like HSP, that contribute to our local economy,” said Thomas Woodward, Bank of America’s Pennsylvania president. “We are pleased to support Preserving American Freedom, a project that will not only help to restore these important pieces of our heritage but also bring them to life for all to see.”

Much more than just an online history exhibit, Preserving American Freedom will present each document transcribed and annotated using TEI markup (Text Encoding Initiative) – the latest practice in digital humanities – to allow for more sophisticated searching and analysis. The documents will also be set in historical context through essays by noted scholars and professors, including Eric Foner, DeWitt Clinton Professor of History at Columbia University and preeminent scholar on American freedom.

While the Society currently has a digital library available for browsing online, Preserving American Freedom takes a step beyond scanning and uploading images to the web. The new portal is expected to be available to the public in early 2013.

Founded in 1824 in Philadelphia, the Historical Society of Pennsylvania collects and shares the stories of Pennsylvania. It is home to some 600,000 printed items and more than 21 million manuscript and graphic items. Its unparalleled collections encompass more than 300 years of America’s history—from its 17th-century origins to the contributions of its most recent immigrants. The Society’s remarkable holdings together with its educational programming make it one of the nation’s most important special collections libraries: a center of historical documentation and study, education, and engagement.

Bank of America’s commitment to corporate social responsibility (CSR) is a strategic part of doing business globally. Our CSR efforts guide how we operate in a socially, economically, financially and environmentally responsible way across more than 100 markets around the world, to deliver for shareholders, customers, clients and employees. Our goal is to help create economically vibrant regions and communities through lending, investing and giving.  By partnering with our stakeholders, we create shared value that empowers individuals and communities to thrive and contributes to the long-term success of our business.  We have several core areas of focus for our CSR, including responsible business practices; environmental sustainability; strengthening local communities with a focus on housing, hunger and jobs; investing in global leadership development; and engaging through arts and culture. Learn more at www.bankofamerica.com/opportunity and follow us on Twitter at @BofA_Community.