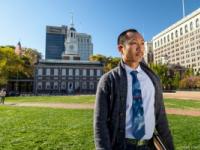 Hold These Truths tells a story, buried by history, of one American’s attempt to reconcile his love for a country that labeled him a second class citizen. Gordon Hirabayashi’s real-life 50-year journey brings us the astonishing facts of Japanese Internment, the US government’s orders to forcibly remove and mass incarcerate all people of Japanese ancestry on the West Coast, through the eyes of a Quaker college student who was simply looking for love and the American Dream. When confronted with the ultimate challenge to his freedom, Gordon embarks on a truly profound and brave defense of our Constitution, taking him on a wild adventure of discovering his Quaker faith, hitchhiking to prison, and ultimately, challenging the law in the highest court in the land… twice.

Philadelphia actor Makoto Hirano gives voice to over thirty characters in this one-man tour-de-force regional premiere, which celebrates the triumph of the power one person has to change a nation.

On the anniversary of Executive Order 9066 that allowed for Japanese Internment, Join HSP for the 7 p.m. show on February 19.

Use code HSPMEMBER to receive a 25% discount on tickets.

For a pre-show, chat with Matthew Lyons, HSP's Director of Archives and Collections Management, as he looks at the real-life letters, artwork, newspaper clippings, and more from Japanese Americans relocated during internment.

The Philadelphia premiere of Hold These Truths is Barrymore eligible and runs 90 minutes long.