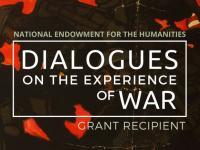 The Historical Society of Pennsylvania, in partnership with Warrior Writers, has been awarded a $100,000 grant from the National Endowment for the Humanities (NEH) for a series of discussion programs titled The Art of Re-integration: Veterans and the Silences of War.

“Through this collaboration we hope to contribute to a healthier veteran community, where veterans and their families can speak openly with their peers and put their unique perspectives in a historical context,” says program director Christopher Damiani, of the Historical Society of Pennsylvania.

Starting this summer, the project team will use an intensive 5-day preparatory program to train six veteran and non-veteran discussion leaders to facilitate intimate conversation programs that will happen on a monthly basis throughout the year. The programs will engage veterans, their families, and humanities enthusiasts in conversations about heroism, re-integration, suffering, and anti-war activism, in the context of three conflicts: World War I, the Vietnam War, and the Global War On Terror. Historical background will be provided by a selection of HSP’s archival sources and other published sources.

These small-scale conversations will culminate in a panel discussion for a broader public audience in April 2019.

The Historical Society of Pennsylvania is a provider of education and information for the people of Philadelphia and beyond. With over 21 million documents—including manuscripts, graphics, and ephemera—HSP serves more than 4,000 on-site researchers annually and millions more around the globe who use its resources online. HSP offers extensive online resources including digital collections, curricular materials, and hosts educator workshops, public programs and lectures throughout the year.

HSP is also a chief center for the documentation and study of ethnic communities and immigrant experiences in the 20th-century, and one of the largest family history libraries in the nation. HSP’s collections center on eastern Pennsylvania, southern New Jersey, and parts of Delaware and Maryland, but they also include a wealth of materials on the eastern U.S., the founding of this country, and the diversity of ethnic and immigrant experiences across the nation, thanks to the addition of the holdings of the Balch Institute for Ethnic Studies in 2002.

Warrior Writers (WW) is a national non-profit. Their mission is to create a culture that articulates veterans’ experiences, build a collaborative community for artistic expression, and bear witness to war and the full range of military experiences. WW creates non-judgmental, navigable and welcoming spaces where veterans and family members can find community, explore their creativity, and begin to share their military experiences with others. WW is a program of CultureTrust Greater Philadelphia, a nonprofit charitable trust serving arts, culture, and heritage programs of diverse practices and cultural traditions in the Philadelphia region.

The Art of Re-integration: Veterans and the Silences of War has been made possible in part by a major grant from the National Endowment for the Humanities: Exploring the human endeavor.