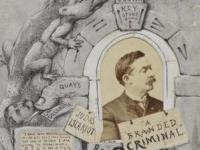 The Historical Society of Pennsylvania is nearing the conclusion of Historic Images, New Technologies (HINT), a two-year project to enhance the description and discovery of its graphic materials and promote the linking and sharing of content among institutions and scholars.

The project’s overall objective is to make archival graphics more accessible for online users and to encourage other repositories to adopt the new tools and practices. As such, HINT involves several complementary parts.

HINT project staff have significantly enhanced the digital image viewer used in HSP’s Digital Library, allowing for more user-friendly searching. This new tool will have a lasting effect on HSP's ability to manage and describe its digitized images.

In the course of developing the new image viewer, HINT project staff have also digitized 500 political cartoons from the collections. These cartoons – spanning American history from the colonial period through the Progressive Era – represent a diversity of topic, issues, and events befitting our raucous democratic process.

Politics in Graphic Detail is an innovative digital exhibit featuring cartoons annotated according to Text Encoding Initiative (TEI) P5 guidelines. The exhibit also demonstrates the capabilities of HSP’s new image viewer tool, allowing HINT project staff to create "zones" within each image that, when clicked on by a user, will display pop-up text containing editorial content and more information about the people, organizations, and events depicted. This encoding will also include Linked Open Data (LOD) relationships, which will enhance the discovery of HSP's images and create more opportunities for sharing data between HSP and other institutions.

In the run-up to the launch of Politics in Graphic Detail, HSP will share a new cartoon digitized as part of the project each day on Facebook, Twitter, Tumblr, and Instagram. Follow HSP to get a sneak peak of these illustrations from Thomas Nast and other luminaries of American political cartoons!

The Historic Images, New Technologies project was funded by a grant from the National Historical Publications and Records Commission’s (NHPRC) Innovation in Archives and Documentary Editing program.