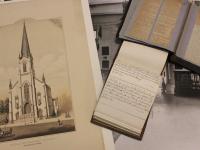 1865 was a pivotal year in American history. With the end of the Civil War, Lincoln’s assassination, and the beginning of Reconstruction, politics were forever changed. On a more human scale, lives were changed, too.

To commemorate the sesquicentennial of the end of the Civil War, HSP’s newest document display, 1865 – Eyewitness to History, features items from its collection related to these momentous occasions in American history. 1865 includes manuscripts, maps, photographs, prints, and more.

The surrender at Appomattox, the passage of the 13th Amendment, and the establishing of new organizations to help "freedmen": these events are brought to life through the words and illustrations of those who lived trough them. The display is free and open to the public during regular library hours.

1865 is the collection of eyewitness accounts, including the letters and diaries from soldiers, civilians, and even the conductor of Lincoln's funeral train. These writings help to humanize past events - with sadness and humor – and illustrate the personal consequences and impact of historic events.

Read how Lee looked on the day of surrender or how a frustrated Confederate General struggled with an oath to the Union. Items not found in traditional textbooks, such as the correspondence of ordinary folks, are replete with interesting anecdotes. Learn how a soldier adopted a stray dog and how another coped with his wife’s lack of letters.

As part of 1865 - Eyewitness to History, visitors will be able to view:

For those not able to visit our historic library and archive, 1865 - Eyewitness to History contains nine transcriptions of featured materials available online.

Questions about the display or the featured items? Please feel free to write to HSP's Christopher Damiani.