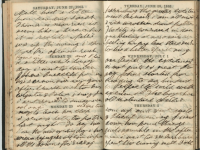 PHILADELPHIA, PA – The Historical Society of Pennsylvania (HSP) is pleased to announce that Ann Gordon’s essay, “Getting History’s Words Right: Diaries of Emilie Davis,” which appeared in the April 2015 issue of The Pennsylvania Magazine of History and Biography (PMHB), has been awarded the Boydston Essay Prize by the Association for Documentary Editing.

The Boydston Essay Prize was established in 1995 by Jo Ann Boydston to honor the best essay or review published anywhere during the previous two years, the primary focus of which is the editing of a volume of works or documents.

“In her comparison of three new editions of the diaries of a young African American woman in Civil War Philadelphia, two in print and one online, Gordon provides readers a glimpse at the painstaking work of documentary editors and at the choices editors and historians make, revealing the interpretive nature of all historical work,” notes Tamara Gaskell, former editor of PMHB.

For a limited time, a free copy of Gordon’s article is available for download.

At the outset of the Civil War, Emilie Davis, a 24-year-old free African American woman in Philadelphia, was attending school and sewing clothes to support herself.  An avid diarist, Davis jotted brief daily entries recounting events, both big and small, during the years 1863-65.

Mixed in with the minutiae of Emilie’s everyday life are entries recounting African Americans’ celebration of the Emancipation Proclamation, nervous excitement during the battle of Gettysburg, collective mourning of President Lincoln’s death, and much more.

Davis’s diaries, which came to HSP in 1999 and have only recently become available for research, offer readers a lively and deeply personal account of the war’s “memorable days,” as Davis often referred to them, opening a small and very personal window onto Philadelphia’s vibrant African American community. Records such as Davis’s and other similar sources create a more complete portrait of life for African Americans during this critical moment in American history.

Emilie Davis’s diaries are among HSP’s most treasured documents, protected in the same case that houses early printings of the Declaration of Independence and handwritten drafts of the U.S. Constitution.

The Pennsylvania Magazine of History and Biography, HSP's scholarly magazine published since 1877, is one of the country's most prestigious state historical journals. PMHB is a benefit of membership and is also available to individual and institutional subscribers. Visit HSP.org/Publications for more information.