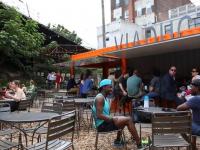 Cool down this summer with HSP's collection at Philadelphia's latest pop-up beer garden.

HSP is partnering with The Pennsylvania Horticultural Society (PHS) as part of their summer pop-up beer garden series.

This year, PHS is sponsoring two gardens: the garden at 1438 South St., now in its third year, as well as a brand new garden at Viaduct Rail Park, 10th and Hamilton Streets, part of a creative reuse of the old Reading rail trestle in the Callowhill neighborhood. HSP is providing archival images of the Reading rail line, to be mounted in the garden's gallery.

The new PHS pop-up at the Viaduct Rail Park, with an opening celebration at 5:30 p.m. Friday, June 10, will have food from chefs Jason Cichonski (ELA and Gaslight) and Sylva Senat (Dos Tacos and the future Maison) and management from HFA Bridge. The bar will have six taps and canned beers, as well as serving wine and cocktails. Special themed dinners and events are planned throughout the season. More information is available here.

The pop-up gardens are due to run through September 30.

Major support for the PHS Pop Up Garden at the Viaduct Rail Park has been provided by The Pew Center for Arts & Heritage for creative installations by designers, artists and historians that will interpret the site and introduce visitors to the rich architectural heritage of the three-mile park. Official Partners are Friends of the Rail Park, the Historical Society of Pennsylvania, Arts & Crafts Holdings, HFA Bridge, and the Reading Company.

Promotional Partners are Victory Brewing Company, the LandHealth Institute, and the City of Philadelphia Mural Arts Program, which will bring the Philadelphia History Truck to the garden and coordinate artistic interventions in the neighborhood this fall.