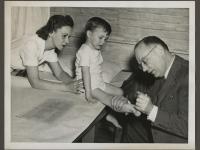 This lesson provides interdisciplinary opportunities for students to investigate both past and current public health matters that have affected and continue to impact Philadelphians in a global setting. For example, students may want to probe the city's efforts to solve major health crises, view various institutional and corporate efforts to treat and/or cure patients, understand the social complexities of such events, investigate the international ramifications of public health policies, or even delve into how the arts can reflect and give historical context to the city's medical practices.

How can the story of another American, past or present, influence your life?
How does continuity and change within Pennsylvania history influence your community today?
What role do multiple causations play in describing a historic event?

Southeastern Pennsylvania chapter of the American Red Cross in the Influenza Epidemic September-October, 1918
The Kind of "Assisted Emigrant" We Can Not Afford to Admit
A Case of Infectious Fever
Lazaretto Quarantine Station Glass Lantern Slide
“That Liberty Shall Not Perish From the Earth,” Fourth Liberty Loan poster, 1918
Dead House on the Schuylkill During the Yellow Fever in Philadelphia in 1793
Bush Hill Mansion in 1737 watercolor
Committee to Attend to the Malignant Fever, minutes 1793-1794
Society for Crippled Children photographs, 1944-1945
Emergency Aid of Pennsylvania headquarters interior and exterior photographs, circa 1914
Elizabeth Sandwith Drinker Diary
Report of the Board of Health of the City and Port of Philadelphia for the Mayor for 1864
Report submitted to the Honorable J. Willis Martin, Chairman, Philadelphia Council of National Defense
Report on the Emergency Work of the National League for Woman's Services in the Recent Epidemic of Influenza

Part A: The Past
1. This lesson can begin with the teacher helping students to define what a "public health crisis" is, what some of the related issues can be, and the historical setting for these crises/issues in Philadelphia. The teacher may wish to utilize/draw from short summaries of four major public health crises included in Part F: Yellow Fever, Influenza, Polio, and the Lazaretto Quarantine Station.
2. Small groups of students may select one of the topics to study based on their interest. The teacher should be sure that all four topics are covered.
3. Unless the teacher has already introduced some of the major historical aspects of each topic, each group may read and study the summary along with the primary document(s) that are included in this lesson, with the goal being to make a brief oral presentation on the topic to the rest of the class. Each group should mention how the city, various institutions and agencies, and individuals all sought to address the crisis/issue, as well as an international dimensions that are a part of each topic (such as the origin of the 1793 Yellow Fever outbreak or immigration at the Lazaretto Quarantine Station).

Part B: The Present
4. After these presentations, each student group should begin to investigate current public health issues that are affecting Philadelphians acoss all populations in our city, covering as many neighborhoods, ages, social classes, cultures, as well as ethnic and racial groups as possible. There are many interesting choices here, such as the opiod crisis, Type 2 diabetes, mental health, international immigration health concerns, the current anti-vaccine movement, etc.
5. Another dimension of current public health issues in Philadelphia is how our city's various governmental agenices, hospitals, and faith institutions address these matters.
6. Students may also learn about Philadelphia-based pharmaceutical corporations', educational institutions', and scientists' efforts to address major public health issues.
7. Students may also explore cities in other coutnries (particularly their urban settings) so that they can develop context for what Philadelphians face today regarding public health issues. Three examples are influenza, the continuing issue of Polio, and the Zika virus. Although cases of Polio have been rare in the U.S. since the 1970s, this incurable, highly contagious disease still exists in Afghanistan, Nigeria, and Pakistan. There is some fear that the recent anti-vaccine movement--which is active in Pennslyvania--may lead to an increase in the number of cases of Polio in our region. The Zika virus is active in many different countries. The UN's World Health Organization (WHO) tracks, assists in treatment and care, and works to eradicate many different diseases throughout the world and its resources would be a good tool to utilize in these investigations.
8. Students may also be interested in investigating the topic of medical education in Philadelphia's past and present, especially the international aspects of its practices and impact.
9. A special topic is immigration to Philadelphia. While the Lazaretto Quarantine Station no longer exists, its history prompts questions about the health and medical concerns of modern immigrants into the Philadelphia area from all over the globe. Of course, both historically and currently, there are many political dimensions to the topic of immigration. According to the federal Immigration and Nationalality Act, anyone who wishes to immigrate to the United States must undergo a medical screening in their home country before arrival. The Childrens Hospital of Philadelphia (CHOP), Einstein Hospital, and Temple Hospital all have refugee health programs.

Yellow Fever: In the summer and fall of 1793, when Philadelphia was the capital city of the new United States, yellow fever hit in epidemic proportions, killing approximately 5,000 people--more than ten percent of the city's population. The disease was likely carried to Philadelphia through infected ships and passengers from the West Indies. The 1793 outbreak was the deadliest and is the most famous, but similar epidemics also occurred in 1798, 1803, and more. Individuals and institutions reacted in many different ways. For some people, getting out of the city was the first response; others stepped in an offered their services as nurses, physicians, and other caregivers. Within two years, the city established a permanent Board of Health which enacted regulations to set up quarantine areas and new sanitation codes. With each outbreak however, only winter's colder temperatures actually ended the epidemic by eradicating the mosquitoes that transmitted the disease. Notable aspects of the 1793 epidemic include the stories of Richard Allen, Matthew Clarkson, Stephen Girard, Absalom Jones, and Benjamin Rush. Our city's story lays a solid foundation for investigation of the caring for and curing of many mosquito borne illnesses that are a part of the global community's past and present.

Influenza: When many of us catch the flu each year, we may not think much about the many varieties of influenza or the other viruses that have affected millions of people around the world for generations. In fact, Philadelphia's story provides many leads for an important and revealing investigation: We know that Philadelphians suffered worse than other urban residents during the worldwide epidemic that hit in 1918. 50 million people died around the world, including 700,000 people in the United States. Of that number, 16,000 were Philadelphians. Some major features of the timing of the 1918-1919 outbreak that worsened the situation in Philadelphia include the influx of people searching for employment due to WWI industrial manufacturing, limited number of medical caregivers (many were in Europe treating soldiers), misunderstanding of the virus's transmission patterns and potency, population density, and the Philadelphia Department of Health's limited response. So, who did help care for the people suffering from the flu in Philadelphia in 1919? Pennsylvania General Hospital and medical staff from the University of Pennsylvania cared for thousands, while numerous volunteers from civic associations and faith-based institutions worked alongside medical and nursing staff and students. The Roman Catholic Archdiocese participated too, with seminarians responding on care and burial teams. Unfortunately, many Philadelphians blamed recent immigrant and the city's poor for the epidemic.

Polio: Similar to the historical circumstance of the other topics considered in this lesson, polio's past is strongly connected to the Philadelphia area. While some teachers and students may know that Franklin Delano Roosevelt suffered from paralysis due to the effects of polio (or perhaps Guillain-Barre syndrome) throughout his presidency in the 1930s and 40s, the Philadelphia chapter of the story began much earlier. The 1916 Polio epidemic affected many thousands of people across the northeastern portion of the United States, including our city. Philadelphia's Department of Health created quarantine areas to isolate the sick, and the state health agencies closed schools to limit the spread of the virus. Within the next few decades, scientists in the region, including Hilary Koprowski, Jonas Salk, and Maurice Hilleman (among others) began to identify several strains of polio and then succeeded in creating a vaccine along with pharmaceutical companies, including Cutter Laboratories, Lederle Laboratories, and Merck. Numerous national organizations, such as the March of Dimes (which FDR founded) and international agencies such as the World Health Organization, UNICEF, and the Global Polio Eradication Initiative have all sustained the effort to search for a cure, while continuously supporting the use of the vaccine. Polio was basically eradicated in the United States by 1970, but the disease still plagues Afghanistan and Pakistan. Polio is a topic that is especially visual because of the existence of historical photos of children whose limbs were affected by the virus, and so young people may be interested in the history of polio, as well as its current status and potential impact from the anti-vaccine movement.

Lazaretto Quarantine Station: At a time when immigration issues flood our daily news feed, Philadelphia's story of restrictions on people coming into the city and region takes on new importance. The first such restrictive effort came in 1700, when Philadelphia officials began to inspect ships arriving though the Delaware River. Shortly thereafter, permanent facilities and medical staff added further processes placed on both cargo and passengers. Starting in 1801 (and lasting until 1895) the Lazaretto Quarantine Station on Tinicum Island became the hub of immigration control in Philadelphia. This quarantine hospital is the oldest in the United States, and seventh oldest in the world. Given the almost 100 years that Lazaretto operated, many questions can be raised regarding the station's medical caregivers (both physicians and nurses), administrative staff, as well as the immigrants themselves. As we have asked of those who came through Ellis Island and Angel Island, we now turn to Lazaretto Quarantine Station and ask: Who were all these people? What were their experiences like? Where did they come from? What happened to them after Lazaretto? How did there experiences differ from global quarantine practices in the same era? According to some of the available records from 1847-1893, over 90 percent of the people suffering from illnesses such as typhus or yellow fever, actually survived; as such, it stands to reason that the care and practices must have been relatively good. Philadelphia's current status as a sanctuary may get students' attention too, as they seek understanding about the implications of its designation as such. Also, students can investigate the Children's Hospital of Philadelphia, Einstein Hospital, Temple University, and Lutheran Services of Pennsylvania, and many other local instructions, to learn about their refugee health programs.

The Immortal Life of Henrietta Lacks

Both Sides of the Vaccination Question

Sarah Sharp is the World Heritage Education Consultant at the Global Philadelphia Association.