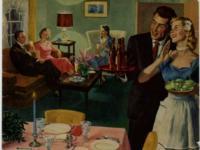 The central historical question for this lesson is: How (and why) did images of women in advertising change during the 1900s? In analyzing individual advertisements and then comparing them, students will be able to trace changing perspectives on the role of women in American society.

Though students do not need specific historical understanding for this lesson, a very general understanding of the timeline of women’s rights movements in American history will be helpful.

Please note that some of the historical documents included in this lesson depict women in a demeaning and negative way; indeed, the nature of those depictions is the focus of inquiry for this unit. For this reason, this lesson will be most successful in a context where students have practice addressing sensitive topics with respect and in a spirit of academic inquiry.

Note that the procedure for this lesson and for the lesson on images of African Americans is the same. Repetition of this protocol will help students understand historical concepts and develop historical thinking skills.

Remind students of the way that they analyzed contemporary advertisements (see the first lesson in this unit, What Ads Tell Us).

One by one, present students with the advertisements ranging from 1906 to 1984. For each document, ask students to answer the following questions:

Here are sample answers to these questions using the Quaker Rice ad from 1906:

Note that there are six ads included in this lesson, and asking each student to analyze each ad may take too long. One option might be to present each ad briefly in a slideshow, and then “jigsaw” the analysis task by assigning one or two ads to various groups of students, who can then present their findings to the class. Another option would be to cut down on the number of ads you present. A final option, of course, would be to spend more than one hour on the lesson.

To complete this lesson, students must answer the central historical question by making a historical claim and supporting that claim with evidence from the documents. Teachers can ask students to do this in discussion or in writing (or both). The question asks: How (and why) did images of women in American advertising change over the twentieth century?

In general, readers of the documents used in this lesson will find that images of women in advertising changed over the course of the twentieth century, as did images of African Americans, reflecting a more expansive idea about women’s roles in society. The first three advertisements, spanning from 1906-1952, all depict women in a domestic role of some kind: feeding children or feeding guests. The subsequent ads don’t necessarily keep the female figures in that role, but in many of these we see another dominant theme: the sexualization of women in advertising. The Springmaid sheets ad from the 1940s or 1950s is explicitly sexual, both in its visual image and in its pun-filled copy. The 1968 Hair Strate ad is the first in the group to depict a woman’s face filling up a large portion of the ad, but she is not alone: two men in the background admire her, reinforcing the idea that a woman’s role was to please men. The 1984 Salem Cigarettes ad provides the most casual and relaxed female figures in this group of ads, but again, in this case the two women in question are laughing in conversation with a man, who holds them both close.

There are two ads in this group that are outliers. The 1969 Dewar’s Scotch ad is a portrait of a lone woman, serious and beautiful. The ad copy is even focused on her, containing a brief interview with the subject, who is named and reported to be a fashion designer. (The details of her “profile” remind us that this ad still exemplifies feminine stereotypes of the day; the woman “[t]alks softly” and “[w]orks intuitively.”) The lack of children or male figures in the ad sets it apart from the others, highlighting the fact that views of women in society were never monolithic. The other outlier, however, returns us to the narrow gender roles prescribed for men and women for most of the twentieth century. The Allegheny Power ad from 1964, boasting a “professional team” and a “staff of experts” for customers, includes not a single woman (and no one of color).

To help students answer the “why” part of the central historical question, ask students to consider historical context. The Dewar’s Scotch ad, because it stands apart from the others, might be a good place to start. What was happening in 1969 that might have challenged society’s views of women? What other changes in American society are mirrored in these ads?