Teaching about Philadelphians on the margins - past and present

Teaching about Philadelphians on the margins - past and present 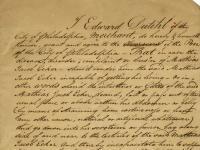 *This blog is the seventh in a series by Sarah Sharp, Global Educator for World Heritage Philadelphia.

In 2016, the Pew Charitable Trusts published Philadelphia: The State of the City, a study which reported that “more than 400,000 Philadelphians live[d] below the federal poverty line, including 37 percent of children and 43 percent of Latinos.”  From the early 1700s on, Philadelphians have shown their awareness of numerous groups who suffer from limited means.  Over time, residents and the city government have taken a variety of steps to alleviate or contain the problems that these populations had.  As teachers, we can use the topic of Philadelphians on the margins to gain perspective on the City’s modern and past efforts to help those in need and to compare to similar efforts around the world.

Six days every week, staff and volunteers at Broad Street Ministry (BSM) in Center City Philadelphia serve meals to and help Philadelphians in many other ways as they offer “radical hospitality.”  BSM is among dozens of private and public agencies across the City that assist the distressed among the population with housing, educational support, job search assistance, medical care, among other services.  Even just considering hunger relief, the diversity of organizations is striking (for example, Project HOME, Philabundance, and Historic Fair Hill).

Of course, all of these various agencies provide far more than food and other tangible services; each also shows warmth, kindness, sociability, and affection for their fellow Philadelphians, offering respite from crippling isolation, substantial personal difficulties, and economic destitution.  Youth and adult volunteers learn new awareness and understanding about the lives of people who walk the streets too and may not be all that different from themselves.  Using BSM again, imagine two guests chatting over lunch and completing a crossword puzzle from The Philadelphia Inquirer, talking about the recent political election, or discussing what clothes might be available at BSM for an upcoming job interview.  Volunteers participate in many of these conversations, too, as well as distribute mail to guests and help someone complete the application for an identification card, and many other social services.  Volunteers may also witness a guest speaking with a nurse, enrolling for Medicaid, or getting assistance with a legal matter – all of which may be new experiences for the volunteer to see.  As more and more students complete service, often school-sponsored, they may be curious to learn more about this aspect of the City’s history.

From the early 1700s on, Philadelphians and colonial assembly officials showed their awareness of numerous groups who suffered from limited means and took steps to alleviate or contain the problems that these populations had.  The City’s Overseers of the Poor began operations to contract out children from their families as indentured servants, among other activities.  A city almshouse, as well as a Friends Almshouse (operated for poor and aged Quaker women), and various workhouses opened at about this time also. (For more, see http://philadelphiaencyclopedia.org/archive/almshouses-poorhouses/)

International events, such as the French and Indian War, 1754-1763, added concerns. Refugees fleeing hostilities arrived in Philadelphia from elsewhere in the colonies as well as from Nova Scotia during these years.  Various groups, including Quakers, found means to house these people.

Between the 1750s and the early 1800s, numerous events related to Philadelphians’ health are important to note.  Several minor and major Yellow Fever epidemics occurred, and City authorities took steps to manage these dramatic times of illness.  Since both Pennsylvania Hospital and the City’s almshouse would not accept Yellow Fever victims, these people found space in a vacant building and then at Bush Hill.  Pennsylvania Hospital “for the relief of the sick and miserable” (as its cornerstone  prcolaims) opened in 1755, and the first health clinic for the poor began operations in 1786 ().

Offering some historical comparison between Philadelphia and the international scene, records indicate that Pennsylvania Hospital cared for more patients, more than 9,000 in the first 25 years, than Paris and London did..  The City’s almshouse already had a small number of rooms for the mentally ill and an infirmary.  This site eventually closed and Philadelphia expanded similar operations as the Blockley Almshouse in 1835.

How Philadelphians, just as in our own time, knew who these populations actually were and how they felt about these populations are other key topics, but not always easy to uncover.  In the 1700s, records of Gloria Dei Church, in the Southwark neighborhood, referred to lower-class white people as “Strangers” (including immigrants, laborers, and sailors).  They also used the term for all African Americans, no matter what their wealth was.  With Pennsylvania’s abolition of slavery in 1780, freed blacks found themselves drawn here, but did  not see the same rate of economic success as other migrants and immigrants.  From the 1790s on, records of the Philadelphia Guardians of the Poor show that this agency not only levied and collected taxes from residents, but also used these funds to support the Almshouse and the House of Employment   Any child whose parents had died or were unable to care for him or her was subject to indenture, such as happened in 1796 when “Sarah Newton aged 6 years [was bound for a] term of 12 years [to learn] the Art and Mystery of Housewifery and Sewing.”

Beginning in the 1800s, the City’s circumstances changed.  Not only was European immigration rapidly increasing in Philadelphia, but manufacturing and other economic activities rose to new heights also.  Pauperism grew, too.  Various city agencies and private organizations rose to help fill the need, but not without complaint.  One report complained that the city’s residents paid more in the way of a “pauper tax” than did those Boston, New York City, and Baltimore, with less to show for it in the way of relief   And, in another report, this comment leaps out to modern readers: “...poverty is too often the legitimate issue of a profligate and vicious life…[but] Humanity demands even for these outcasts...a bare subsistence in the meagreness and privations of which the unworthy dependant may see his degradation, and others may be deterred from following his example.”  ('Report of the committee appointed at a town meeting of the citizens of the city and county of Philadelphia, on the 23d of July, 1827, to consider the subject of the pauper system of the city and districts, and to report remedies for its defects')   New city laws allowed authorities to require financial support from absentee fathers until the child was old enough to be bound out for service and less of a burden on the City, as early as age 7.

Since Philadelphia’s path through the early 1800s  included major industrial expansion, numerous questions about these economic shifts may arise for students to pursue.  Some building fascades still remain, and students can use their imaginations to breathe life back into these structures.

The City’s poorest neighborhoods, such as Northern Liberties, Moyamensing, Southwark, and Richmond (Clement, hsp link) were where the “laboring poor” lived (including seamen, domestics, seamstresses).  Sometimes 4-5 families crowded into dwellings intended for one family, similar to today’s common “couch-surfing”.  There was certainly no job security with declining work conditions and ineffective union activity.

The role of religion

Catholic institutions, such as churches, schools, and support organizations, operated in only limited ways in Philadelphia in the early 1800s.  This fact meant that there were few Catholic schools for children’s education within this faith tradition, and very few Catholic families who could adopt or care for any Catholic children who were removed from families’ homes.  Thus, Protestant facilities and families assisted with these needs -- not easy adjustments for either sect.  When Catholic churches were able to step in, they provided charity of all types, including helping to reunite families and writing letters for individuals who could not do so themselves.

Few facilities existed to care for African American individuals or families in Philadelphia in the colonial or new nation period.  One important individual stood out, however:   Stephen Smith (1795-1873), a successful coal and lumber seller who opened the Home for the Aged and Infirm Colored Persons in the 1860s.  Nothing like Smith’s home existed before this period, although African Americans created own their mutual aid societies much earlier in certain neighborhoods to take care of each other. (To learn about the Free African Society, see online exhibit.)

Finally, looking in yet another direction, Philadelphia’s poor white women and prostitutes gained more attention as the 19th century proceeded.  In 1800, leaders of the newly established Magdalen Society contacted a similar organization in London for advice regarding bylaws, building plans, and other matters.  The Society’s site eventually became the location for the Franklin Institute.  Hundreds of Philadelphia women, most associated with various denominations, became involved in the Society’s activities to show these disadvantaged populations different paths.  Female staff and visitors came to talk, prepare meals, and teach trades such as sewing, cleaning laundry, and raising food.  The Society focused on “young, impressionable, and thus redeemable” girls, not older, less malleable “fallen” women.  As economic strains depressed the working classes, the Society was overwhelmed with the needs of these populations, as more young women chose prostitution for income.  By 1848, the Society had financial support from both the city and county of Philadelphia. In the year before, the Rosine Association for Magdalenes, established by Quaker women had begun similar work based on religious ideas, but solely under female management.

We can also use this information as a springboard from which to see how Philadelphia may compare or contrast with ongoing global efforts.  If your students have ever trick-or-treated for UNICEF and gathered coins in the little orange boxes on Halloween night along with the candy, then they have already connected with such activities   .  Students can also delve into similar activities such as assisting the unemployed, homeless, or refugees that have developed in Philadelphia’s cultural siblings in other World Heritage cities such as Berlin, Germany; Cuzco, Peru; or Cairo, Egypt.  Unlike in the early generations of Philadelphia’s history, international standards of concern for adults and children now exist, many based within various United Nations’ agencies.  Students can explore these examples at http://www.un.org/en/index.html, and also at http://www.un.org/en/universal-declaration-human-rights/.

Klepp and Smith, eds., Life in early Philadelphia : documents from the Revolutionary and early national periods

Lawrence, History of the Philadelphia almshouses and hospitals from the beginning of the eighteenth to the ending of the nineteenth centuries : covering a period of nearly two hundred years…;

Moak, Philadelphia guardians of the poor :bonds for the support of illegitimate children and other indigent persons, 1811-1859

Pollard, The Stephen Smith Home for the Aged : a gerontological history of a pioneer venture in caring for the black aged, 1864-1953