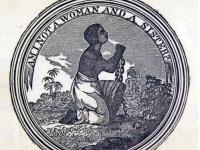 For HSP's June 3 event, “Their Story, Our Story: African American Women and the Fight for Freedom”, we invited historians, dramatists, and the public to discuss African-American female abolitionists and their place in history.

Reading from his play If She Stood..., playwright Ain Gordon described the experience of an abolitionist woman in the late nineteenth-century fighting for her social and political beliefs.

“She fidgets in her seat not knowing will she do this thing she feels she cannot but must. Will she pluck herself out from what has been this comforting mass of people, suddenly now she wants to overturn, or stay and play one of them, force them to suffer no matter how tiny, of this precipice moment?”

HSP was a perfect setting for this dramatic reading featuring actress Melanye Finister. It’s at HSP that Ain found the main inspiration for If She Stood..., buried within the minutes of the Philadelphia Female Anti-Slavery Society. 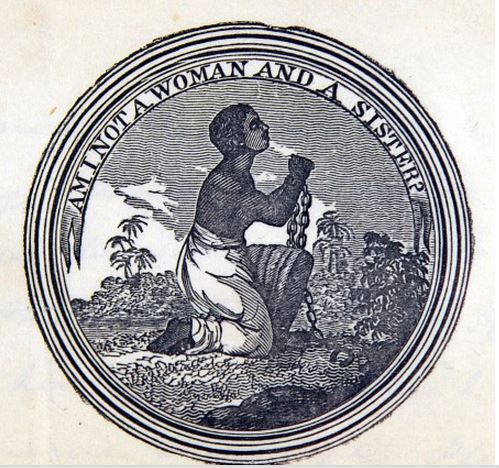 Seal of the Philadelphia Female Anti-Slavery Society. With an inter-racial membership since its inception in 1833, the Society included African-American businessman James Forten's three daughters.

While the discussion began with the struggles of the African American female abolitionist movement, conversation soon broadened to include the ways in which American history, in its overarching narrative, has perhaps minimalized these important public figures and their contributions to the emancipation movement.

“Traditional history is a ruthless editing machine,” observed Ain while describing his craft as a playwright who seeks to re-examine the historical record through dramaturgy by giving voice to these lost – or muted – figures.

(For more about Ain’s work, see our An Artist Embedded page).

Giesberg discussed the evidentiary silence that surrounds people of color in Philadelphia during the abolitionist movement within the historical record. 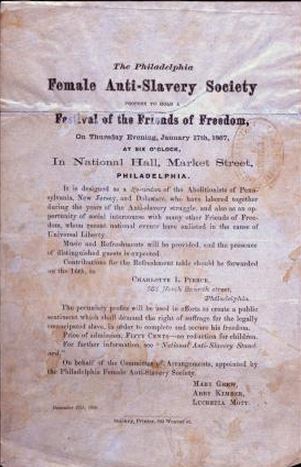 1866 handbill for the Female Anti-Slavery Society's "Festival of Freedom"

“They left very few personal papers, and it makes sense that they would, because on one hand, they’re very keenly interested in promoting the progress of their race, advocating for the end of slavery, and for civil rights, but they’re also actively protecting themselves and their families from everyday racism and violence in their everyday lives,” she explained.

“In order to protect themselves, they didn’t leave much of a paper trail.”

This silence, however, didn’t prevent audience members from palpably feeling the plight of these women nearly forgotten by history’s “Big Picture.”

Actress Melanye Finister performed a stirring, emotional monologue from If She Stood... based on the ideas of abolitionist Sarah Mapps Douglass. Following the reading, Giesburg proudly displayed digitized images from the recently recovered diary of Emilie Davis, an African-American woman who lived in Philadelphia during the Civil War. 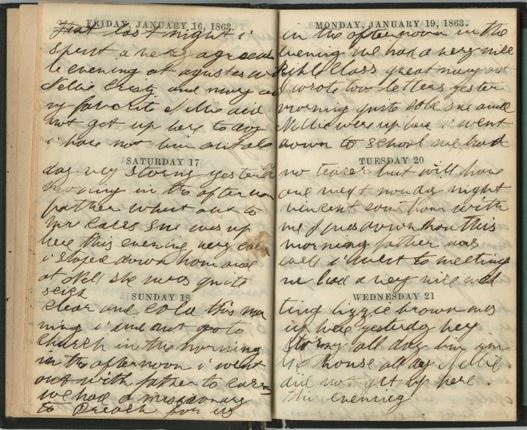 The first of three diaries by Emilie Davis, a young African-American woman who lived in Philadelphia during the Civil War. Davis was likely in her late teens or early twenties when she began writing her diary in 1863.

Finister spoke to how learning these women’s stories from acting in If She Stood... had personally affected her. “I was completely ignorant to Sarah Mapps Douglass, and when Ain started talking to me about her, and the possibility of embodying her and acting her, I started trying to find out more about her, y’know, just going online first. And she – well, all of these women – were off the charts, brilliant,” she said.

“Getting the chance to stand up and be her, to walk in her shoes for a moment, was exhilarating.”

One of the members of the audience found Finister’s monologue especially moving and authentic. “You enabled us to go back to the moment,” she said. “You made us feel it.”

HSP aims to continue these thought-provoking and emotionally-stirring “retakes” on American history on Wednesday, June 3, with “Before Stonewall: The Gay Pride Movement in Philadelphia.”

Bob Skiba, archivist at the John J. Wilcox Jr. LGBT Archives, will be on hand to discuss the humble beginnings of Reminder Day in Philadelphia and the early Homophile movement with Ain Gordon and Ada Bello, a founding member of the Daughter’s Of Bilitis Philadelphia Chapter and the Homophile Action League.

These conversations are a part of An Artist Embedded, a two-year project in which HSP and playwright Ain Gordon seek to engage their audiences in an expansive discussion of individual rights in the contexts of historical events, examining the sometimes blurry line between historical fact and emotional truth.