A Potluck from Martha Washington’s Cookbook

A Potluck from Martha Washington’s Cookbook 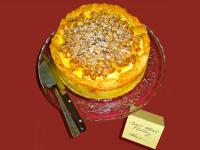 Always looking for relevant and interesting ways to connect with the items in our collections, staff of the Historical Society of Pennsylvania recently cooked our way into the historic kitchen of America's inaugural First Lady.  While few people are able to say that they’ve met the First Lady and even fewer can boast of sampling her cooking first-hand, HSP has unique access to a presidential pantry through Martha Washington’s Booke of Cookery, which has been in our collections since 1892.

For Tara O’Brien, who has revived dozens of dishes from historic cookbooks as Director of Conservation and Preservation, organizing a potluck from Martha Washington’s Cookbook seemed like a fun way to take advantage of this hidden gem by trying and sharing a bunch of historic recipes at once.  Her idea took off and staff began to peruse Mrs. Washington’s recipes, deciphering 17th century cooking instructions, considering ingredients, claiming which dish they would cook, and eventually testing out the first First Lady’s cooking in their own kitchens.  In a refreshing break from the normal Monday grind, co-workers shared their creations in a potluck lunch open to all HSP staff on July 21st.

Below you will find all the dishes from Monday’s potluck.  While there were a couple delicious deviations from the historic recipes-- ahem, I’m looking at you Ron’s Ribs and Not-so-Washington Beer & Cheddar Bread-- the rest of the recipes came straight from Martha Washington’s Cookbook.  The book itself is split into two sections, A Booke of Cookery and A Booke of Sweetmeats (desserts), and the recipes below are listed in their respective categories. 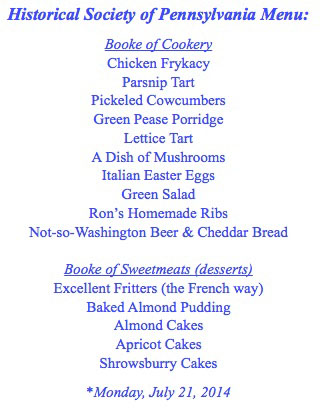 Though it might strike you as merely a novel experiment in the kitchen, the experience of engaging with history through food is of immense value.  Just as your own family recipes allow you to reconnect with your heritage or treasure the memory of loved ones, cooking historic recipes allowed us to form a connection to Martha Washington-- imagining the different cookware, ingredients, surroundings, and company in which the cookbook originated.  As you can see from the potluck photoalbum above, this study of history was far from dull and rather an adventure that produced tangible results.  We came away from the potluck nourished, not only from the historic dishes that literally fed us, but also from the act of eating and sharing our cooking as a community.  After all, half the enjoyment of food is that it brings people together and this is ultimately why cooking historic recipes is such a fulfilling way to engage with history.

Martha Washington’s recipes are outstanding by-the-way; the potluck was a sweet and savory success!

What do you think of cooking historic recipes?  Is it possible to relive history through food and the act of cooking or do you think this is a novel waste of time?  Do you consider family recipes to be historic?  Should teachers use food to teach history?

Find more about Martha Washington’s original family cookbook and steal a recipe directly from it here.

Thank you for documenting our wonderful potluck! Looking forward to you next foodie post.

I completely agree that this is a great way to connect with history and the past. Everyone eats, right?

We had this great experience, too, of preparing food together and breaking bread together when an antebellum chef came to campus last fall. Because cooking and eating are universal experiences, it connects us to each other and makes us feel part of a community when we sit down and share this together. People told stories of how their grandmother makes this or that . . . it really can connect us to past peoples and places in a tangible (edible!) way.

Thanks for your comment Jen, I'm glad to hear that you agree! We should use a historical cooking as an excuse to eat more good food in good company more often...