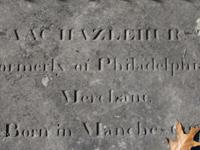 October saw Part One of my discoveries pertaining to a name within our Bank of North America collection, Isaac Hazlehurst. If you missed that first post, please read it prior to the following, where I detail Part Two of my findings.

This week finally offered an opportunity to take the short drive out to Mount Holly, New Jersey, the location that Isaac Hazlehurst, Jr. chose as a refuge for his family from the skirmishes of the Revolutionary War. As I am not a Philadelphia native, the magic of being surrounded by the history of our country’s founding, and the people who helped make it so, felt particularly tangible as I drove the mere 18 miles to the cemetery that was the final home of twelve members of the Hazlehurst family.

Arriving at St. Andrew’s Graveyard felt like the continuation of a dream. Walking up the narrow drive, I realized an element of the experience which, in my excitement, I had failed to anticipate – the actual task of locating the Hazlehurst family plot in a cemetery much larger than my imaginings. Instead of concentrating on the now present worry of the task at hand, I chose instead to study the lovely St. Andrew’s chapel. Its history is immediately apparent, and I was instantly transported with images of the Hazlehurst family worshipping together in its small interior. The chapel doors were locked, so with the glimmer of hope of exploring the space removed, I turned around to study the acreage of the cemetery. 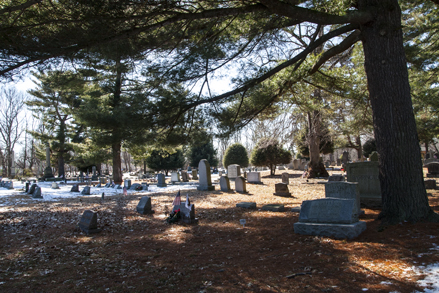 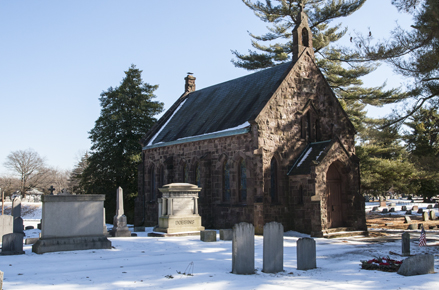 As my prior study revealed that the Hazlehursts were buried in a family plot, many times I had imagined finding a small area designated by a rusty iron fence.  After I turned my back to the chapel, my eyes instantly fell upon such an area. I walked over and exclaimed aloud – it was indeed the very plot for which I searched! After all these months of learning of Isaac, wondering about him, and feeling connected to him through space and time, I had finally found him. It is as if the distance between his life and mine – formerly a span of 150 years – had vanished. 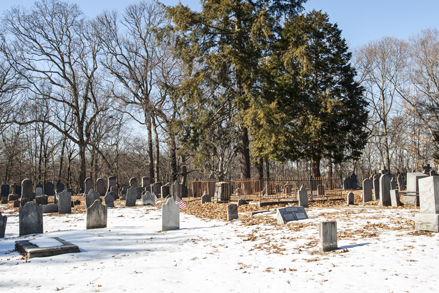 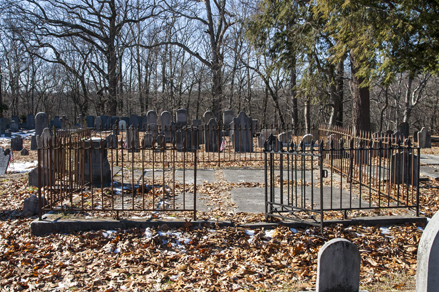 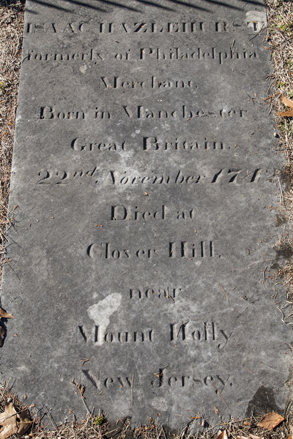 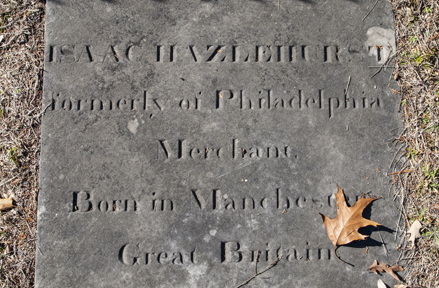 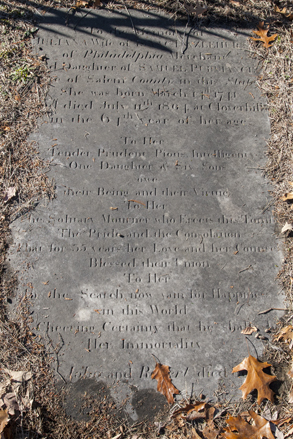 The epitaph on the grave of Juliana Purviance, Isaac’s wife, reads as follows (to the best of my ability):

“To the Memory of JULIANA
Wife of ISAAC HAZLEHURST
of Philadelphia Merchant
and Daughter of SAMUEL PURVIANCE
… of Salem County in this State
She was born March 14th, 1741
and died July 11th, 1804 at Cloverhill
in the 64th year of her age
To Her
Tender, Prudent, Pious, Intelligent
One Daughter & Six Sons
owe
their Being and their Virtue
To Her
The Solitary Mourner who Erects this Tomb
The Pride and the Consolation
That for 35 years her Love and her Counsel
Blessed their Union
To Her
In the Search now vain for Happiness
in this World
Cheering Certainty that he shall …
Her Immortality …
John and Robert died before”

My sadness at leaving the cemetery was abated by the discovery of another historic connection; the grounds are adjacent to the location of a Revolutionary War battle which occurred on December 23, 1776 – the Battle of Iron Works Hill. I was surprised to learn that although Isaac Hazlehurst, Jr. had relocated his family to Mount Holly in the hopes of finding refuge from the war, a decisive battle occurred within a mile of his home. 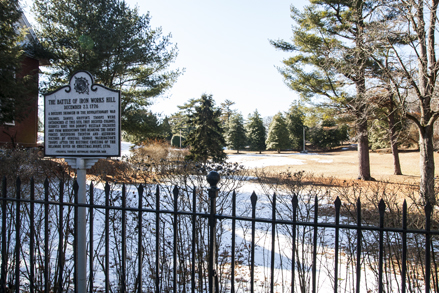 It was time to visit the address I had found as the probable location of Clover Hill, the Hazlehurst mansion and estate. My research had revealed an account of family lore by Isaac Jr.’s granddaughter, Miss Julia Latrobe of Baltimore (the daughter of Mary Elizabeth Hazlehurst and architect Benjamin Henry Latrobe), pertaining to the family’s years spent living in this mansion. She tells of the family playing host at Clover Hill to the staff of the British General during the Revolutionary War, including Lord Cornwallis, and I desperately wished to see the location where this story occurred.

“The terror of my grandparents can be imagined during the short sojourn of these troops. I have heard my grandfather describe his feeling as he saw a soldier tie his horse to a tree, at the foot of which a box of valuables was buried, a bag of oats was thrown down and he expected each moment to see the earth scraped away and the box discovered. This box containing many articles of value, when sought for after the war was over, was never found. The passage of so many horses and vehicles had completely covered over all traces of the spot where in haste and confusion it had been placed.”

Despite the fear and trepidation of housing the soldiers, the family was treated with courtesy, and no damage was done to the property. Part of Miss Latrobe’s tale contained an amusing anecdote of the small children at the time of the British occupancy, including her mother, Mary Elizabeth, and her mother’s younger brother, Samuel.

“Seated upon the General’s knee, my uncle [Samuel] was presented with a glass of wine. ‘We will give you a toast my little fellow, and you shall have this glass of wine. Drink to the health of King George!’ The glass was emptied by the little American in a moment. ‘And now you shall have some more, and we shall drink your toast. Who shall it be?’ ‘George Washington!’ said the child, and laughing heartily the glass was emptied by the officers, who dismissed the brave little fellow with praises for his independence.”

As my research prior to my visit had hinted, the land now serves as grounds for a large apartment development called Village Square Apartments. A conversation with the rental manager confirmed that the complex had been named Clover Hill when the current management company took over twenty-five years prior. However, all hope of discovering more of the family’s history was not lost – she established the existence of a mansion still standing at the edge of the property, now rented as business offices, known as the Ashurst Mansion Office Building. 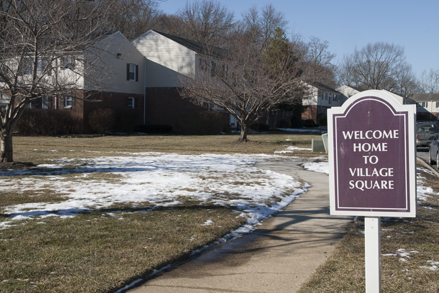 The Ashhurst name was a familiar one from my study of the Hazlehurst family tree, so on the day of my exploration of Isaac’s old haunts, I visited this mansion. I was immediately impressed by both the scale of the house and by the original architectural details. As my visual study dated this house to have been built in the early 19th Century, I knew that this could not be the original Hazlehurst home at Clover Hill – but still I intuited a connection. 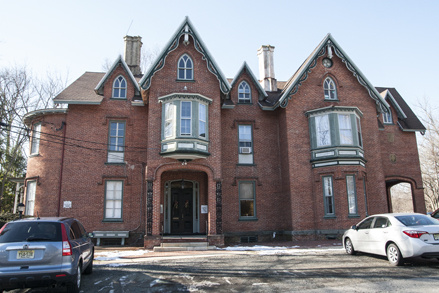 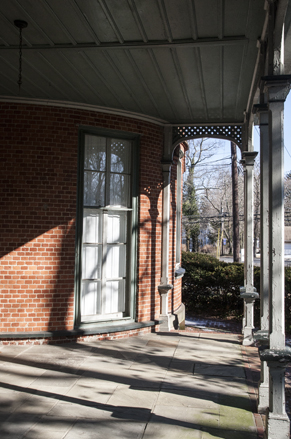 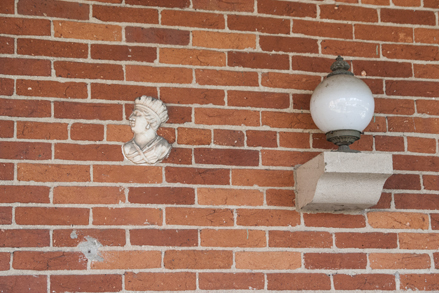 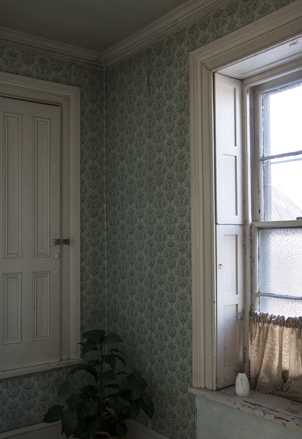 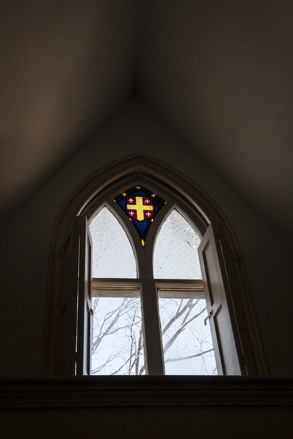 My later research confirmed that the house was built by Lewis Richard Ashhurst, the husband of our Isaac’s granddaughter Mary Hazlehurst, daughter of Samuel Hazlehurst and Elizabeth Markoe. After the couple married, Ashhurst removed the original Clover Hill mansion and built the house that stands today. Ashhurst was the first president of the Philadelphia Trust Company, and a plaque to this effect is still posted on the exterior of the house. 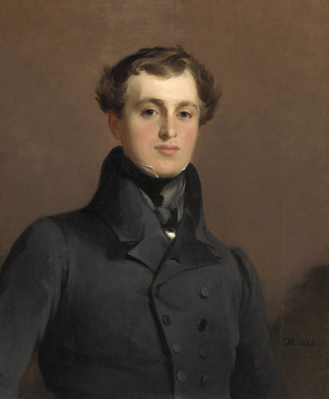 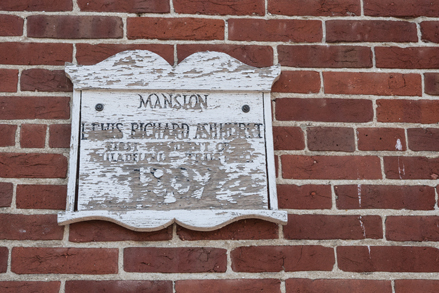 In conclusion, as a conservation technician it has been a wonderful experience to make such surprising discoveries in the contents of the Bank of North America collection. I can hardly stress the influence on my understanding and interest in history this experience has had on me. As a child, it was difficult to grasp the concept that history is defined by the actions and lives of real people that truly existed, people that were living their lives and making decisions to the best of their ability. Researching Isaac and his life, arriving at the location of the chapel where he would have worshipped, in the town where he lived out his later years, a mere mile from the mansion where he lived with his family... these discoveries transformed mere tales into a tangible history.

Although my reporting on Isaac Hazlehurst, Jr. has come to an end, I know that the information contained in the 671 volumes of the Bank of North America collection can lead to a wealth of historical connections and findings. These volumes contain so much more than numbers and accounts; they are the trace evidence of families, businesses, and lives once led.

To view more of my photographs taken in Mount Holly, visit our flickr.

It is interesting how our lives are transformed by another's history! My husband is a general contractor in Canada who found the original plans for a beautiful summerhouse that he is now in the process of building. As I research its history and the Ashhurst Estate upon which it resided, I have learned not just about the buildings, but also about the heritage of Mount Holly and the families of Ashhurst and Hazelhurst.

Thank you for the insight. I am excited to share these histories with whomever comes to own our recreated summerhouse! http://www.build4u.ca/blog/ashhurst-estate-summerhouse

Very interesting! I came across your post while researching Samuel Hazlehurst. He was the ancestor of Canadian Green Party leader, Elizabeth May. Was there a signer of the Declaration of Independence amongst the Hazlehurst family?

Great story, will reference your blog in my next story. build4u.ca, great blogpost and to my surprise you hail from Stratford, my former hometown. Lived in your hood for many years!!!! Nice work marketing your craft, are you on Twitter?

Thank you for posting this, I am named after Franklin Hazelnrst a great x? Grandfather of mine. It’s neat to see these bistorical details. Thank you.

Blog Post
Watermarks Found in the Bank of North America Collection, I
Blog Post
And Yet Forsooth! A Crime of Injuring Infringement!