And Yet Forsooth! A Crime of Injuring Infringement!

And Yet Forsooth! A Crime of Injuring Infringement! 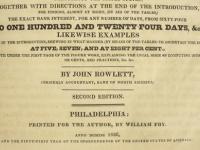 My past two blog entries chronicled the history behind the enchanting name of Isaac Hazlehurst, and hinted that there must be countless other histories awaiting discovery within the Bank of North America collection. With that said, I never expected to begin treatment on a bank-related volume and find a dramatic story lying within, its details already thoroughly chronicled, merely awaiting a reader to appreciate the rhetoric of the author. 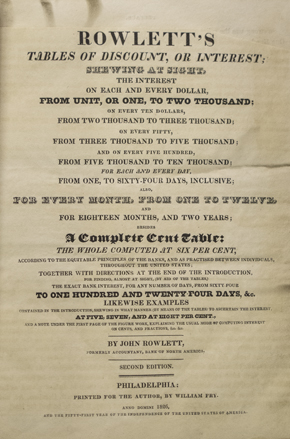 John Rowlett, formerly an accountant for the Bank of North America, devised elaborate tables with pre-calculated sums of interest to assist with the daily tasks of the bank clerks. In an era before calculators and computers, these tables were first published as Rowlett’s Tables of Discount or Interest in 1802 and were utilized widely by those in banking and finance. Rowlett was so assured of the accuracy of his interest tables that in the preface of his book he offered an award of one hundred dollars, and then one hundred-fifty in the second edition, to anyone that could detect an inaccuracy in his calculations. 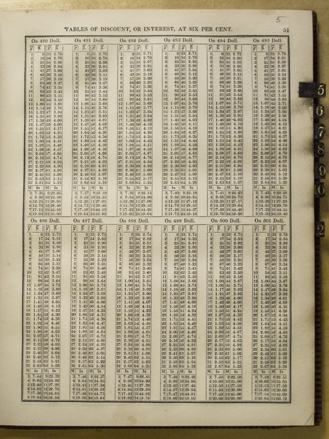 One of the many tables in the second edition, volume 666.

As I learned from the preface of the second edition of Rowlett’s Tables of Discount or Interest, published in 1826, Rowlett experienced a case of brazen Copyright infringement just prior to the publishing of the second volume. He thus wrote portions of the new preface with particular intent – it contains the first instance of public shaming we have discovered within the Bank of North America collection. In our era of social media, the immediacy of public shaming is commonplace, and we have grown to expect that no public figure’s actions go unnoticed or forgotten. But even with the acceptance of these instances in the digital era, there is still something about witnessing public shaming in print that shocks us with its permanence; and yet, I believe we can understand the complete, unabashed desire for revenge that John Rowlett must have felt in order to do so.

Below I have transcribed the accusatory portion of Rowlett’s preface complete with his chosen italics and emphasis. Being of a dramatic nature myself, and often prone to hyperbole and emphasis in my own rhetoric, I was incredibly pleased to be the one working on this particular volume. We often think of the bank clerks and others involved in the bank’s operations as being gentlemen educated in politeness, and that viewpoint still stands; but it is a comforting realization that these fellows faced their own professional frustrations, and that they too sought a platform for that expression. Rowlett’s outrage becomes almost tangible when read in a medium as permanent as print, bound in book form, for he identifies the insidious Copyright infringers by name! I cannot help but assume that Mr. Fletcher and Mr. Thayer lived to rue the day they ever crossed Mr. Rowlett. 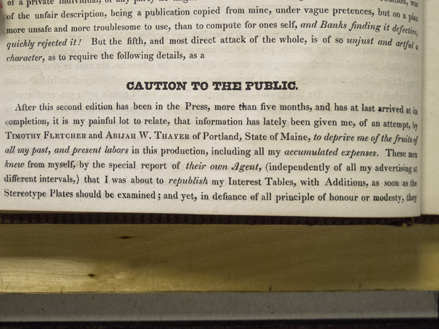 The beginning of the transcribed portion of Rowlett's 1826 preface.

CAUTION TO THE PUBLIC.

After this second edition has been in the Press, more than five months and has at last arrived at its completion, it is my painful lot to relate, that information has lately been given me, of an attempt, by Timothy Fletcher and Abijah W. Thayer of Portland, State of Maine, to deprive me of the fruits of all my past, and present labors in this production, including all my accumulated expenses. These men knew from myself, by the special report of their own Agent, (independently of all my advertising at different intervals,) that I was about to republish my Interest Tables, with Additions, as soon as the Stereotype Plates should be examined; and yet, in defiance of all principle of honour or modesty, they have since presumptuously, without my authority or consent, published and advertised (not as taken or copies from Rowlett’s, but) even in my name, nearly one half of my Tables, falsely shewing likewise, by means of a District Clerk’s certificate (easily obtained for the fee) and copied on the back of the Title page of their book, that they have claim to the copyright! Their advertisement is in these words; “Rowlett’s Tables of Interest – a new and improved edition, for sale by &c.” thus deceiving people into a belief, that it is this second edition, which the public have, from my previous Advertisements, long expected! A more complete method to injure me, and in the most extensive and cruel manner also, could scarcely be contrived! For my own part, I should think there was no more dishonesty, in my entering into a field of Fletcher and Thayer’s, and reaping and carrying off their Harvest, after they had prepared the ground and sown the seed; or of picking their pockets, or robbing them on the highway, than to copy during their lives, any work of theirs, (arduous and costly, or otherwise,) written or designed for profit, without first obtaining their permission; whether they had ever had a Copyright, or not.

But whether after all, they have printed from my Tables correctly, or made mistakes, I cannot at present determine; yet certainly, the Work exhibits so much the appearance of being slovenly got up, even in the common way of printing, like an Almanac, &c. without any of those extraordinary examinations and checks, on which alone, dependence can be placed, and which the importance of Interest computations, for Banks and Public use demands, that as a Tradesman, I should be afraid to rely upon it, and as a Bank Officer, I would spurn at it: And as for expedition and general practical use, it is widely different from my original, theirs being merely an Abridgment, containing less than one half, and bound up in form like an octavo Bill Book, which makes twice the number of pages to turn over, than by a quarto, like this, in search of an amount, and is besides, without an Index to assist in the operation.

The price of their Abridgment, half bound, in octavo, is moreover three Dollars, without Index, and the price of this, my entire work, half bound in quarto is four Dollars, with Index; but if my Book (setting aside its superiority,) was to be charged as high as the Abridgment, the price of mine would be about seven Dollars! or if the Abridgment was to be charged as low as my Book, the price of the Abridgment would then be, only about one Dollar and fifty cents, instead of the three Dollars, at which the Publishers sell it! and yet forsooth! my name is used, as a tool to sanction and to recommend their diminutive, spurious Book, containing errors or no errors, price and all! and the only argument which they use to the public, for issuing their publication and demanding such a price, is in substance, that my work is of inestimable value ,and ten Dollars per Copy has in numerous instances been paid for it, when to be had!

These facts considered altogether, I feel it to be my duty to the Public, as well as to myself, to put individuals on their guard, lest the spurious Abridgment should be purchased unwarily, for this, my Stereotype Edition of the entire work, &c. and I do besides indulge a hope, that the Public will pointedly discountenance the outrageous plagiarism, or by degrees, in similar encroachments, society, will ‘ere long, become so demoralized and depraved, as to make the tenure of Property very precarious.