The Origins and Early Work of the American Friends Service Committee

The Origins and Early Work of the American Friends Service Committee 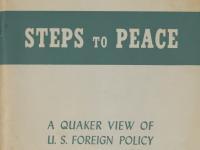 The American Friends Service Committee (AFSC) originated in Philadelphia, ground zero for Quakerism in the United States, with the combined effort of several Quakers in April of 1917. The members who founded the organization were concerned with the sudden involvement of the United States in the First World War and how the Quaker values of peace and non-violence would be affected by the pending military draft at the time.

The founders created methods of alternative service for conscripted Quakers so that, instead of serving in active duty, they would be deployed in other areas of work to aid the war effort in the battle zones of Northern France. During the First World War, Quakers repaired shell-damaged houses and built new cottages for displaced civilians. They also provided clothing, beds, utensils, and farm animals, such as fowl, so that civilians whose livelihoods had been destroyed by the war could start anew. At its peak, the work of the AFSC was carried out by nearly 600 American and English Quakers, both men and women.

Following the end of the First World War, the AFSC continued to lend help to various countries in Europe. Famines that struck Russia and Poland galvanized the AFSC to commit to helping in that region. AFSC workers distributed much needed material and foodstuff to starving populations, focusing as much on helping the famine-struck population start their livelihoods as on immediate relief.

The 1930s heralded the start of the refugee services by the AFSC. While prior work of the AFSC had focused on relief efforts during times of crisis, the suddenly increasing streams of refugees from Northern and Southern Europe brought about the beginning of the AFSC’s refugee services. As early as 1931, victims of anti-Semitism began to flock to Quaker centers in Nazi Germany for help, and in 1932, funds were sent from Philadelphia to Germany to help the refugees. Additional Quaker centers sought to help those victimized by the Spanish Civil War during the latter half of the decade.

The official Refugee Service Committee of the AFSC was founded in 1937 when a Friend from Bryn Mawr College in Pennsylvania was appointed official advisor on refugee and immigration services. Soon a network of Quaker centers connected London and Philadelphia home offices that sought to oversee and aid the centers carrying out direct refugee aid services in Paris, Geneva, Berlin, Frankfurt, Vienna, Amsterdam, Copenhagen and Shanghai.

The start of the Second World War worsened the plight of the refugees in Europe when countries previously designated as refuge countries and sanctuaries because they provided asylum were plunged into a state of war. In response, AFSC Refugee Services continued the work it had been carrying out in Europe by introducing more liaison officers and helpers as a measure to speed up negotiations between refugees and consular offices as well as offering steamship services so refugee-seekers could be helped as quick as possible. The AFSC also provided services in French internment camps, providing food, medicine, and clothing in efforts to offset the otherwise harsh conditions of camp life. In 1942, the amount of money transferred to the refugee aid effort from Philadelphia averaged $18,000 a month.

By the end of the Second World War, the AFSC’s work in war relief and refugee services was well documented and receiving world-wide attention. In 1947, along with its British Counterpart the Friends Service Council, the AFSC received the Nobel Peace Prize on behalf of Quakers worldwide.

The latter half of the decade saw the AFSC extending aid to regions beyond war-ravaged Europe. Its relief efforts connected to the Korean War, the Hungarian Revolution of 1956, the Algerian War, and the Nigerian-Biafran War stand out as some of the largest of their kind during this era.

If the AFSC by the end of the 1950s had become famous worldwide for its work in war-torn Europe, the 1960s served to reinvent its identity as the AFSC pledged support to the American Civil Rights Movement. Spearheaded by notable Quakers, such as Bayard Rustin, it advocated for the rights of African Americans, American Indians, Mexican Americans, and Asian Americans. The decade also went down in history as one of the most divisive eras in the United States due in large part to America’s role in the Vietnam War.

As faithful as ever to its beliefs of peace, non-conflict, and non-violence, the AFSC served as a key agent in the anti-war protests and advocacy efforts that rocked the country during the 1960s. Its prior work during the World Wars, by then, had established the AFSC as a trustworthy global force and its efforts in aiding with draft resistance and conscientious objection helped many young Americans successfully protest the war while avoiding arrests. The AFSC’s status and rapport with the government acted in their favor. 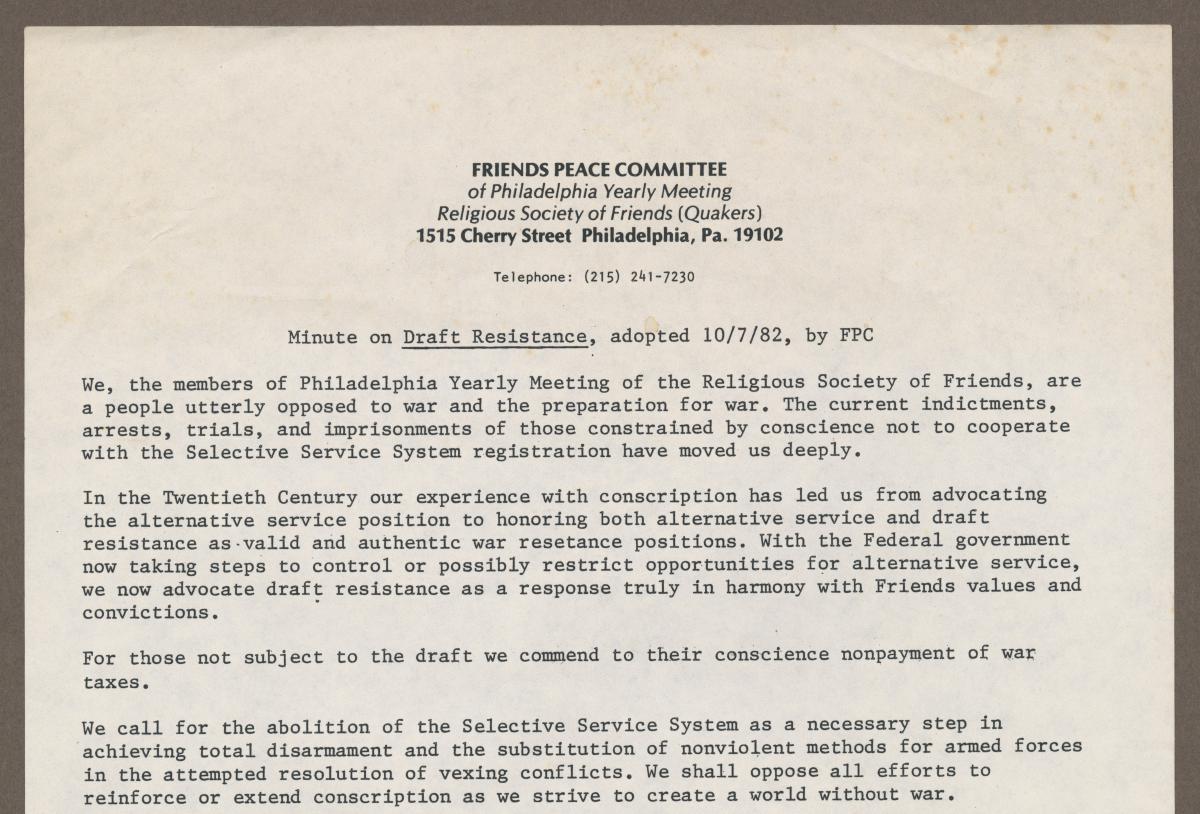 The Friends continue their activisim around issues of peace and huamn rights.  These minutes are within the Mary Bye Papers at HSP, colelciton 3202.

Despite modern criticism for perceived separations from the Quaker ideologies that inspired its founding, the AFSC remains a significant and steadfast presence against war and global conflict. Having developed numerous initiatives—from wartime relief, refugee services, and draft resistance efforts, to recent awareness projects based around art—the AFSC’s work continues to help citizens live peacefully and peaceably.

Help Wanted! The Experiences of Some Quaker Conscientious Objectors by Arle Brooks and Robert J. Leach, 1940

Twenty-Five Years Under the Red and Black Star by the American Friends Service Committee, 1942