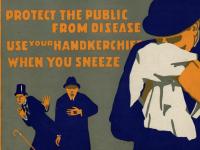 The blog was written by Emily Kulpa, a summer intern from Rutgers University.

Despite being decades apart, the tuberculosis outbreak in the early 1900s and the AIDS crisis in the 80s-90s share a striking similarity, namely with how people responded to them. Both outbreaks were defined by a large response from the public, but also by the fact that they were ignored by state and local governments. One can celebrate the work that was done for these epidemics while also recognizing that more could have been done if not for public biases or political corruption.

During the 1800-1900s, tuberculosis was called consumption due to perceptions that it figuratively “consumed” its victims. The virus that causes tuberculosis, tubercle bacillus, was discovered in 1882 by a German microbiologist named Robert Koch. Seven years later Philadelphia’s own Samuel Gibson Dixon, a professor of hygiene at the University of Pennsylvania discovered a strain of tuberculosis. He then quit his job a year later to do further research at the Philadelphia Academy of Natural Sciences.

Before these discoveries, health commentators speculated that tuberculosis was caused by impure lifestyles and quickly scapegoat the urban poor. Already existing class biases worked against struggling city dwellers, as they were continuously blamed for the disease’s spread by being inherently “filthier” than their rural, supposedly more Christian counterparts. In reality, the spread of tuberculosis was a combination of multiple things: one was the consumption of dairy products from infected cows and another was being in contact with other people who had the virus. Lack of state hygiene codes allowed the disease’s spread, especially in urban areas where many were forced to live in crammed, unmaintained boarding houses.

In 1892, Lawrence Flick, a Pennsylvanian physician, founded the first society dedicated to fighting tuberculosis. With help from Samuel Gibson Dixon, the Pennsylvania Society for the Prevention of Tuberculosis became an educational and advocacy group for tuberculosis patients. It researched ways to prevent tuberculosis and distributed the information to the public through pamphlets and public classes. The Society supplied resources for sanitariums that were treating low-income patients, known as the consumptive poor, that otherwise could not afford care. The early years of the Society were defined by financial struggle to keep its sanitariums alive. Its main source of income was from donors as most of its grant requests to the state government were denied. While the Society also proposed bills to the state government for a sanitarium to be built in every county, none were passed. Despite these setbacks, by 1900 tuberculosis mortalities began to drop and even low-income patients were cared for more substantially than before.

In 1905, Samuel Gibson Dixon left the Society to become the Pennsylvania state commissioner for public health, and Charles J. Hatfield took his place two years later.  While politicians began openly advocating for patients with tuberculosis, but governmental resources went to the Department of Health rather than struggling sanitariums. Starting in 1907, advanced cases of tuberculosis were dismissed from these sanitariums due to lack of space and resources. In 1908, the Society began receiving money from Christmas Seals, which were labels put on holiday cards to raise funds for tuberculosis. Though the Society was much better funded because of this action, Hatfield moved away from preventative techniques and focused on education. More publications on how to not get tuberculosis were sent out; sanitariums were either overcrowded or closed. In 1918 the death rate for tuberculosis patients rose for the first time in almost two decades. Lawrence Flick later criticized the Society, Dixon, and Hatfield in his 1935 publication The Pennsylvania Society for the Prevention of Tuberculosis.

Almost every trend seen in the tuberculosis movement can be seen in the AIDS crisis from the 1980s. For instance, at first, AIDS was seen as a moral disease associated with sexual deviancy and perversion. It became heavily associated with homosexuality. In fact, a less common name for it in the 80s was GRIDS, or Gay-Related Immune Deficiency Syndrome, and it was referred to as “Gay Cancer” by the New York Times in 1981. Even the Reagan administration favored abstinence as the best way to prevent this disease, and several cabinet members went on record for claiming AIDS was a punishment against gay men for “defying nature.”

In response to this point-of-view, the Philadelphia AIDS Task Force was founded in the early 1980s by Philadelphia Community Health Alternatives, now known as the Mazzoni Center. The organization had a local hotline that, when called, provided social and educational services to anyone with AIDS or other STIs. Though it lacked state or federal funding, it was kept afloat by organizations like the Gay Men’s Chorus and the Girlfriends Motorcycle Club. By the mid-1980s, more resource groups for people with AIDS were created, many of which provided a wide range of services. The largest of these organizations was arguably ActionAIDS, now called Action Wellness, founded in 1986. To this day, the organization provides services such as HIV testing, education, counseling, a prison linkage system that gives incarcerated populations access to care, and housing assistance for those who face discrimination for having AIDS.

Kiyoshi Kuromiya, a Japanese American gay man with AIDS, was particularly instrumental in the AIDS movement in Philadelphia. He is best known as the founder of Critical Path AIDS Project, now turned into the Critical Path Learning Center, which served as both a newsletter and a 24-hour hotline. The newsletter provided the latest information on HIV treatment at the time, and was distributed internationally and to incarcerated populations. The CPLC facility continues today to provide free internet access and uses digital information to empower thousands of people with AIDS in Philadelphia. Kuromiya was also a member of ACT-UP, a grassroots organization dedicated to fighting the AIDS crisis through direct political action. Its work includes pushing for easier access to drugs, treatment, and healthcare to people with AIDS. Its most successful protest was outside the Food & Drug Administration Office in 1988, when it shut down the facility for a day demanding quicker and easier access to experimental drugs that could treat HIV.

Despite all of these efforts, the number of AIDS-related mortalities continued to climb throughout the 80s. This trend was largely attributed to the lack of federal response to the crisis, as the administration continued to promote abstinence with little regard to other solutions. In 1988, the Philadelphia Commission on AIDS reported that the best response to the AIDS crisis would be more funding for hospitals, easier access to healthcare and education, and more support for grassroots organizations. Even with this, little effective federal action was taken until 1995 when Highly Active Antiretroviral Therapy (HAART) was introduced to the United States. Since then, AIDS-related mortalities have gone down significantly, though there is work still to be done.

Themes such as government inaction, local organizing, and moral discourse towards disease can be seen in both of these health crises. While public response eventually began to alleviate the potential deadliness of the diseases, there is still something to be learned from the first misguided efforts to deal with epidemics. Observing these commonalities in other public epidemics can help us better respond to future ones, trying not to repeat the same mistakes.