Skeletons in the Vaults

Skeletons in the Vaults 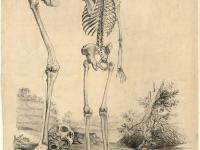 As Halloween approaches, this seems like the right time to share a few of the skeletons in our closets here at HSP. Actual skeletons. Well, actual drawings and prints of skeletons. And they're from our vaults and stacks, not closets, but that was too good of a lead-in to waste. 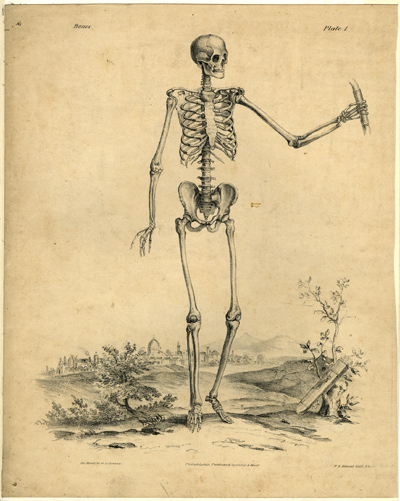 These two undated prints are anatomical engravings, printed in Philadelphia, which are actually quite delicate and pretty. I especially enjoy how the artist has placed the skeletons outdoors, and so they stroll down a country lane, gazing off into the distance through their empty eye sockets and lounge against some leg bones. As one does when one is a skeleton, I suppose. 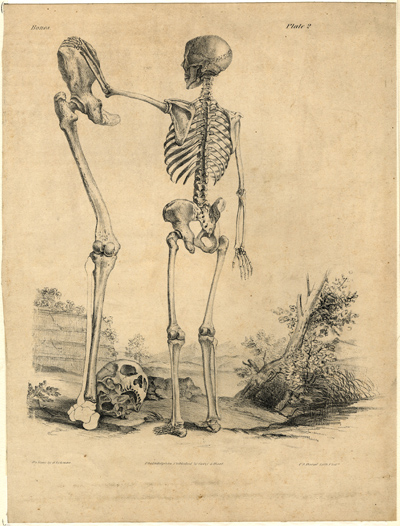 This next ambulatory fellow is from a political cartoon created circa 1820 and dedicated to the Temperance Societies, who advocated against the use of alcohol. The Temperance movement in the United States gained steam throughout the early-mid 1800s and culminated with Prohibition, which was law from 1920 to 1933. This cartoon shows great attention to detail -- you can see how similar this skeleton is to the ones above. The cartoonist obviously cared about scientific realism as well as making his point about the dangers of alcohol. 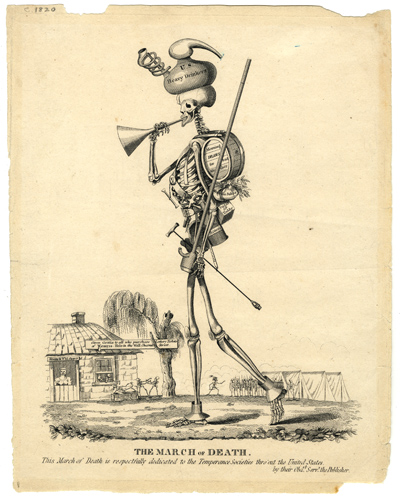 Here, Death (as depicted in his most commonly used persona, the walking skeleton) wears an alcohol still on his head labeled "U.S. heavy drinkers," and carries various ingredients that are used in alcoholic beverages. In the background, a tavern offers free drinks to anyone who buys a lottery ticket, and some skeletons (presumably unfortunate drinkers) cavort on the grass while others perform military drills.

This next image is one of my favorite archives discoveries. It's...well, look at it and take a guess. 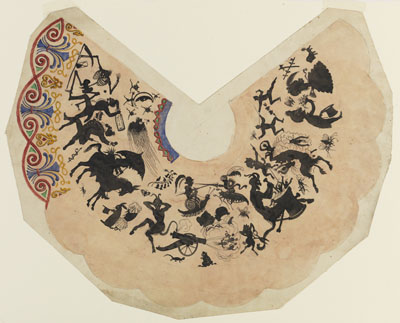 Fan? Collar? Victorian Pacman? My best guess is that it's a handmade (unfinished) lampshade, which would be cut out, rolled into a cone, and placed atop a lamp. It's made of paper and the decorations are handpainted. Here are some highlights, but I really recommend clicking through to see the full image on our Digital Library. 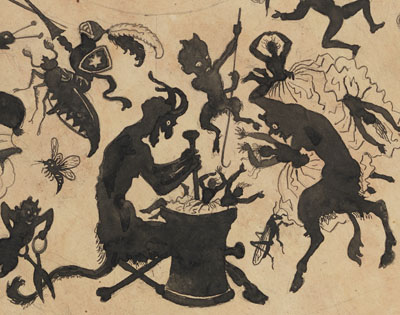 We've got devils grinding frilly-skirted women in a giant mortar and pestle, and one sneaky little devil cutting another's tail with some scissors. 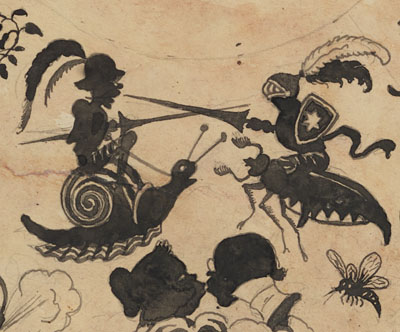 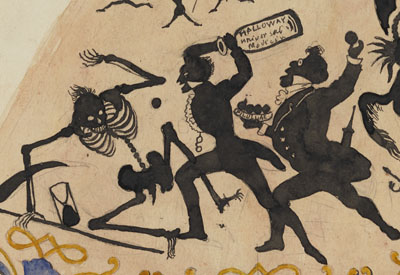 And two men beating back Death using a bottle of "Holloway Universal Medicin" [sic] and a plate of pills. Poor Death has even dropped his scythe and hourglass, so ferocious is the onslaught of modern medical science.

The rest of the lampshade depicts the wind rushing at the moon, scattering terrified stars; a devil shooting human bodies out of a cannon; a man presenting a woman with a bouquet, and lots of meticulously drawn insects creeping around between the larger scenes. The sweet image of the man and woman really does nothing to dispel the overall creepy feeling of this item as a whole, which make it a perfect item to showcase around All Hallow's Eve.

And if anyone knows anything about handmade lampshades, get in touch in the comments!

Great article! I can remember being scared at Halloween time, by 19th-century drawings of Icabod Crane and the Headless Horseman. The drawings were in the "Legend of Sleepy Hollow" book I was given.

The drawings left an indelible impression on me and to this day, I shiver whenever I see death-related 19th-century drawings!! I'm not sure if it was the realism of the drawings or just the way in which they depicted the subject.