The James Gibson Papers, and Other Adopt-A-Collections

The James Gibson Papers, and Other Adopt-A-Collections 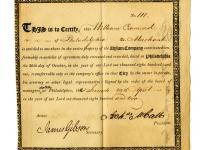 Earlier this year, I completed a very interesting collection, and one that had been adopted: the James Gibson papers (Collection 236).  James Gibson was a lawyer from Philadelphia who, in the late 18th and early 19th centuries, worked with several companies that dealt with the speculation in and distribution of Northern and Western Pennsylvania lands.  These companies included the Holland Land Company (though they worked extensively in Western New York), the Pennsylvania Population Company, and the Asylum Company.

My research on Gibson didn’t turn up much, and it's still a little unclear what exactly he did for these companies beyond, if anything, provide legal counsel.  His collection of papers isn't comprehensive, but they do shed light on the settlement of these then-wild lands of the state. In 1792, the Pennsylvania General Assembly passed an "act for the sale of vacant lands within this Commonwealth." At least some of these lands, particularly those in western Pennsylvania, were to be given to Revolutionary War soldiers. It's possible that Gibson played a role in making sure that these lands were properly distributed. We don’t know from the collection if Gibson profited from the lands himself, since speculation of Western Pennsylvania lands was a popular hobby among Philadelphia's elite at the time. 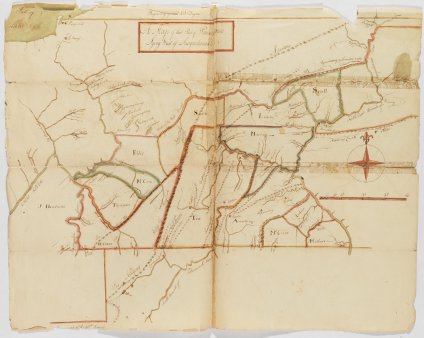 In Gibson's collection, researchers will find quite a bit of information on the behind-the-scenes dealings of land speculators and state officials, such as Allegheny County Commissioner and Revolutionary War captain Ebenezer Denny, Dutch financier Théophile Cazenove, and Judah Colt, and early founder of Erie, Pennsylvania.  Additionally, the collection contains plenty of interesting history on the settlement of Western Pennsylvania during the late 1700s and early 1800s, particularly in term s of the Pennsylvania Population Company's work.  There's also a small amount of Gibson's personal papers, including letters to his wife, but the collection contains little else on Gibson himself.

The James Gibson papers represents just one of HSP's many collections that are up for adoption.  When you adopt a collection, you help pay for that collection to be processed according to current archival standards and for the creation of its finding aid, which helps aid in accessibility. Plenty of other adopt-a-collections can be found in our Shop, but here's a quick sampling of what we have there:

American Society for Testing Materials Records (Collection 3574)
This collection of records documents the work of one ASTM committee that, around the turn of the 20th century, tackled the problem of frequent breaks in railroad tracks.  From their work, a new type of steel was produced that became the industry standard in railroad track construction.

Contemporary Club records (Collection 1981)
The Contemporary Club of Philadelphia was founded in 1886 as a scholarly society devoted to discussions on current events.  The club presented papers from and served as host to local and national political, literary, and artistic figures.

William Redwood records (Amb .7526)
William Redwood was a, 18th century merchant who worked in Newport, Rhode Island; Philadelphia, Pennsylvania; and Antigua, West Indies. His records provide detailed accounts of his work, his plantation workers, and the many goods that he traded.

Judith Shuman Eden papers (Collection 3657)
Eden, a Philadelphia resident and activist, served on the Zoning Board of Adjustment under Mayor John Street and was later appointed to the Zoning Code Commission by Mayor Michael Nutter. Her papers cover various city-wide issues during the 1990s and 200s, such as homelessness, graffiti, parking, Broad Street revitalization, parks/public lands, and vacant lots/property

Stiefel family papers (Collection 3516)
In 1903, members of the Stiefel family set up a movie theater in Philadelphia, the Fairyland on Market Street, and later opened theaters elsewhere in Pennsylvania, and in Baltimore, New York, Washington DC, and California. Their papers document the family's involvement in the local and national entertainment business.