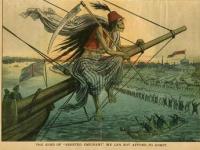 Throughout the history of the United States, national attitudes toward immigration and the resulting legislation have opened and subsequently closed the doors for those wishing to settle here. The country’s reception of immigrants has been influenced by global politics, population concerns, and—under the guise of defending public health—fear of epidemic.

Immigration and disease have become historically linked through rhetoric. This rhetoric has caused disease to inform xenophobia as much as fear of those from other countries pins the predicament of epidemic on immigrants. In a modern age defined by globalism and interconnectivity, discussion regarding migration and its connection to public health only increases in relevance.

There are early examples of xenophobic ideas infiltrating medical studies of yellow fever, cholera, and tuberculosis—all of which at one point plagued a growing Philadelphia. In writing about Philadelphia’s demographics in his 1855 study on yellow fever, Philadelphia-born physician Rene La Roche writes uneasily about the new “influx of foreigners” to the city. Many at the time shared La Roche’s anxiety regarding increasing immigration and changes in the city’s racial makeup. The riots that broke out in 1844 between Catholic immigrants and nativists, as well as the rigorous quarantining practices of Philadelphia’s Lazaretto Quarantine Station, both demonstrated the high tensions in the city during that period.

Nearly two centuries later, medical publications continued to include similar strains of xenophobia. In a 1909 issue of Fresh Air Magazine authored by the Pennsylvania Society for the Prevention of Tuberculosis the Society calls for an exclusively Jewish sanatorium citing that “the condition of the indigent Jewish consumption is particularly hard, and he needs a sanatorium where he may be among his own people.” It claims that because of the increase in Jewish immigration, such a sanatorium is necessary because the immigrants’ “frequent ignorance of the English language and only too often of the ways of the gentile makes it difficult for him to be understood.”

These instances of racism among historical medical studies exemplify one of the central beliefs upholding the fear of epidemic invasion: disease only poses a problem when it affects those who look like you.

Such ideologies continued during the immigration boom of the late 1800s and early 1900s, which changed the ethnic makeup of every American city and inspired a growing public interest in immigration reform. During this time period, immigration processing at Ellis Island expanded to require not only physical but also mental health examinations of those seeking refuge and opportunity in America.

In Bertha May Boody’s 1926 book A psychological study of immigrant children at Ellis Island, Boody records how top ranking immigration officials pushed for increased health screenings. In 1914, Dr. L. L. Williams, a chief medical inspector at Ellis Island, stated that immigrants of the future should present “a clean bill of health, physically and mentally, and a clean bill of character.” These health screenings began to factor race into immigrant processing as well. Boody cites how the Ellis Island health screening regulations stated that “Knowledge of racial characteristics in physique, costume, and behavior are important in this inspection procedure.” This conflation of ethnicity and health popularly employed in the Ellis Island screening practices led to the rejection of thousands suggesting that the push for defending public health in America had a dual intention of racial and ethnic selectivity.

As the immigration boom continued into the 1900s, more and more immigrants were denied entry to the country on the basis of not meeting medical standards. As described in Howard Markel and Alexandra Minna Stern’s journal article, “The Foreignness of Germs: The Persistent Association of Immigrants and Disease in American Society”, more immigrants were denied entry to the United States not because more of them were sick, but because of “a growing list of ailments, physical disabilities, and, over time, determinations of moral status.”

These new mental and moral exams described by Boody, Markel, and Stern don’t protect the country from contagion as health screenings commonly aim to do, but instead deny entry to those who do not threaten public health thus exposing the American fear of outsiders without excuse or apology.