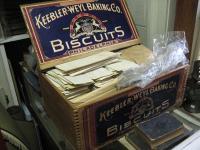 The Historical Society of Pennsylvania offers helpful resources for National History Day (NHD), and of course, boasts many archival collections to support student research. However, for students and teachers particularly interested in local history, or who live far from HSP and want to find primary-source documents close to home, a small repository may be a good place to do research.

What is a "small repository"? There are numerous small, primarily volunteer-run historical societies and historic sites with archival collections in the five-county Philadelphia area. To support these organizations and publicize their archival holdings, the Historical Society of Pennsylvania undertook "The Hidden Collections Initiative for Pennsylvania Small Archival Repositories" (HCI-PSAR) with funding from the Andrew W. Mellon Foundation.

Since the HCI-PSAR project began in the fall of 2011, many important, heretofore hidden archival resources have been uncovered. These underutilized collections are ripe for research and may inspire students who are passionate about local history or are looking for more accessible primary-source resources. Many of the collections held at small repositories go beyond local history, documenting issues and topics of national and even international significance.

Following are a few collections that document topics relating to the NHD 2015 theme, "Leadership and Legacy in History."

A Leader in Solar Power

Frank Shuman (1862-1918) was a resident of Tacony, Philadelphia, and an inventor. He built the world's first solar thermal power station in Maadi, Egypt from 1912-1913: it was used to irrigate the desert near the Nile River.

Frank Shuman was an early innovator in solar power, but what, if any, long-term impact did his inventions have? How has energy production changed over time? When did the environmental movement begin and how has it developed?

A Leader of Pennsylvania

Pennypacker Mills. Samuel W. Pennypacker family papers, 1821-1980 [bulk 1860-1916] (PM.01)
Samuel Whitaker Pennypacker (1843-1916) served as governor of Pennsylvania from 1903-1907 during the "Progressive Era" of social activism and political reform around the turn of the 20th century. During his administration, he passed many laws to protect the people and natural resources of Pennsylvania.

How much power to governors have to shape history? What did Pennypacker do during his time as governor and what impact did he have over time?

Anna Rae Russell Jones (born 1902) was the  first person of color from Philadelphia to join the Armed Forces for World War II. Trained at Moore Institute of Art, Science and Industry, she studied medical and technical illustration and worked as an artist in the Women's Army Corps and then in the civil service for many years.

What statement might Ms. Jones have been making about women's and African Americans' roles in United States society when she enlisted in the military?

What role did Biddle and Jackson play as leaders in the debate over the existence of the Second Bank of the United States? What role do banks play in our economy and what are their legacies after they are gone? How have the public's views of banks changed over time, including after the recent 2008 economic recession?

A Leader in African American Rights

In the face of rising racial tensions at St. George's Methodist Church, in 1787 Absalom Jones (1746-1818) and his friend Richard Allen led African American worshippers in an historic walk-out. Soon after, Jones established one of the first churches in the United States founded by and for persons of African descent, the African Episcopal Church of St. Thomas.

Absalom Jones, Richard Allen, and John Gloucester (1776-1822; founder of First African Presbyterian Church) are three important figures in the development of African American religious community who lived in Philadelphia around the same time. To what extent did they direct history and to what extent were they a product of the times?

To find other collections that relate to this year’s theme, and to get a better sense of the types of collections held at small repositories, HCI-PSAR staff have created an easily navigable subject guide. For descriptions of other archival collections uncovered during the HCI-PSAR project, we recommend browsing the HCI-PSAR finding aids website, hosted by the Philadelphia Area Consortium of Special Collections Libraries. There, you can view all of the archival collections at the small repositories that have participated in our project. Finding aids are being added to both the subject guide and finding aids website on an ongoing basis, so check back frequently.

Keep in mind that staffing and resources vary at small repositories, so students may not get the same level of assistance and support that they would receive at the Historical Society of Pennsylvania. However, some small repositories do have professional staff members, many are "staffed" by volunteer retired teachers, and several are even hosting pre-service teachers to create lesson plans with primary-source documents as part of the National Archives' Cultural Collaboration Fieldwork Initiative.

HCI-PSAR staff hope that these resources will prove helpful in familiarizing teachers and students with the many small historical societies and sites that can be found in the Philadelphia area, and the important archival collections and primary-source materials that they hold!