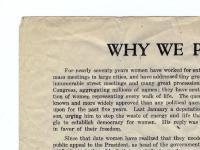 The Pennsylvania branches of The National American Woman Suffrage Association (NAWSA) and The National Woman’s Party (NWP) employed a variety of tactics to advocate for their cause. Holding meetings, distributing literature, and writing newspaper and magazine articles were the primary activities of the Pennsylvania branch of NAWSA. It affirmed in 1913 that the organization would pursue “educational methods in keeping with the dignity of the movement and the character of the women engaged in it.” To encourage men in Pennsylvania to support the 1915 referendum, NAWSA members traveled to every county in the state with the “Justice Bell,” a replica of the Liberty Bell.

When NWP founder Alice Paul came to Philadelphia in 1913, she conducted controversial “open air meetings” in places such as City Hall plaza and a busy intersection in the neighborhood of Kensington. Once attention turned to the White House and the Congress, Pennsylvania women participated in NWP’s increasingly aggressive strategies. In 1916, NWP organized the Silent Sentinels, the first group to ever picket in front of the White House. Later, the Sentiels participated in the “Watchfire” protests during which Woodrow Wilson’s speeches were burned and his body was hanged in effigy. They hoped to pressure Wilson to follow through on promises to promote a suffrage bill in Congress and to point out the hypocrisy of engaging in a war “for democracy” abroad while women in the United States were denied the franchise. Numerous participants in these demonstrations were arrested, charged with “obstructing traffic,” and imprisoned at Occoquan Workhouse.  Many prisoners, including Dora Lewis, reported being beaten, verbally harassed, and compelled to endure an airless, rat-infested facility. Alice Paul, who was kept in solitary confinement, launched a hunger strike to protest the deplorable conditions. Paul was force-fed by prison authorities and transferred to a psychiatric ward. In spite of the arrests, protests continued for 18 months. Publicity about the arrests and subsequent abuse in jail engendered outrage and led to increased support for the cause. All charges against the women were eventually dropped.

Why We Picket Flyer

a. Ask students to write down things of significance that happened in that year.

b. After a few minutes ask for volunteers to share what they had written down.

c. If nobody mentions the 19th Amendment, share with the students that this was the year women were granted the right to vote in the United States.

i. Potential Answers: The year the United States decided not to join the League of Nations, the year after WWI, Mexican Revolution

a. After the students are familiar with some basic information on the documents, the teacher should instruct them to compile a list of strategies used in the campaign for woman suffrage.

b.The teacher should write the following questions on the board to help guide the student thought process:

i. Which methods of protest are most effective?

ii.  How do social movements choose methods of protest and what circumstances lead them to change methods?

iii. Under what, if any, circumstances should social movements choose methods of protest that are against the law?

The students should arrange the strategies that they found in a continuum from least to most militant, attaching dates, when possible, to the instances in which a given strategy was used.

3. After the students have finished reading, the teacher should organize them in pairs and to share.

a. The pair should then partner up with another pair (create a group of four) and compare their lists.

b. After comparing lists, each group should write their list on the board so that the whole class can see.

c.After seeing all the strategies on the board, the class can decided which strategies were most important and which were peripheral.

4. After the class has decided on key strategies, the teacher should shift the discussion to review what circumstances led the activists to change strategies

a. The teacher should have students stay in their groups of four and discuss the following questions:

i. Can they come up with any generalizations about what led to changes in strategy?

ii. Which strategies were the most effective in pressuring politicians to support the 19th Amendment?

iii. Did their willingness to go to jail for their beliefs further the cause of female suffrage?

5. If there is time remaining in class, the Teacher should go over some of the answers. If not, discussing the answers as a review Do Now activity at the start of next class could be appropriate.

Referendum: The practice of referring measures proposed or passed by a legislative body to the vote of the electorate for approval or rejection