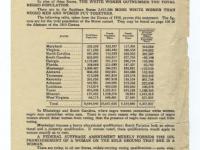 The 1910s were an era of violent racial conflict.  Major riots occurred in Southern and Midwestern cities, and Northern whites adjusted uneasily to the massive influx of migrating African Americans seeking opportunity in urban centers. Rather than making common cause with oppressed African Americans, the suffragists, particularly those affiliated with NWSA, sought to distance themselves from their black counterparts. Buying into the Social Darwinist ethos of their era, many leaders of the woman suffrage movement were bitter that African American men had been given the franchise before them, and they did not want questions about “The Race Problem” to interfere with passage of the 19th Amendment. Although significantly larger percentages of black than white women believed that they deserved the franchise, and although black leaders like Ida Wells-Barnett and Mary Church Terrell spoke out for voting rights, the major woman suffrage organizations discouraged the participation of African American women.

In addition to being mostly white and native-born, activists in the woman suffrage movement were generally from the top of the socioeconomic ladder. In spite of their lack of leadership in the movement, working-class women, particularly those who were part of the war effort, were utilized as evidence of women’s critical role in American society and as an illustration of why women deserved the right to vote.

1. Have students draw on their prior knowledge of the late 19th and early 20th-century American history to brainstorm about why activists for woman suffrage were such a homogeneous group.

a. Answers could include: Obstacles to African-American economic successes (Jim Crow Laws, Sharecropping), middle and working-class women did not have the economic freedom to spend time protesting, etc.

2. Students should examine the documents in which leaders of the suffrage movement explicitly express the desire to separate themselves from “colored women.”

3. After the students have finished reading, the teacher should divide the students into groups (4 people to a group) and have the students write down their answers and discuss the following questions:

a. What is Social Darwinism?

b. Do all oppressed groups have a common struggle?

c.  Is excluding one oppressed group legitimate when fighting for the rights of another?

d.  What reasons does Dora Lewis offer to support her decision to distance themselves from “the Negro question”?

4.  The teacher should direct the student in their groups to read Alice Paul’s 1918 letter.

a. In their groups, student should discuss why she wanted “munitions workers” in the audience of a Pittsburgh speech.

b. The students should create a list of 3 potential reasons why she wanted “munitions workers” present.

c. The teacher will compile a class list taken from student responses.

5. In Dora Lewis’ letter to her daughter, she brings up the topic of fighting for African American rights in conjunction with women’s rights.

a. The teacher should lead a class wide discussion by posing the question: Why did women not want to work to fight for African American rights? Was this the right thing to do?

6.  After the discussion, the teacher should break the class up into two groups. The groups should debate if they were leaders of the NWP would they fight for African-American rights as well as women’s rights.

a. During the debate the teacher should record student answers in a pros and cons list.

b. Students should copy this list down in their notes as they participate in the debate.