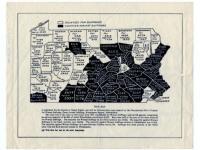 The quest for woman suffrage had local, statewide, and national dimensions, which evolved throughout the 1910s. In spite of a county-by-county effort and strong support in the northern and western regions of Pennsylvania, the 1915 referendum to give Pennsylvania women the vote was defeated. Once the focus shifted from the state to the federal level, activists like Dora Lewis toured the western states where women already had the franchise to encourage them to vote against congressional candidates who had failed to support woman suffrage. Once Congress passed the 19th Amendment, state-by-state campaigns were waged to ensure its ratification. This shifting between state and national campaigns illustrates the formidable challenge of pursuing a substantial extension of the franchise and demonstrates the significant barriers to amending the Constitution.

Note:Not all pages of the program are essential to the lesson. Teachers may choose pages at their discretion

1.      Examine the program from the Pennsylvania Woman Suffrage Association’s 1914 Convention. In pairs, students should come up with responses to the following questions:

a. How many different Pennsylvania cities, towns, and counties were represented in the group’s leadership?

b.What does this indicate about the statewide strategy of the organization?

2. After the students have time to write and discuss their answers, the teacher should lead a class wide discussion.

3. Keeping the students in pairs, the teacher should instruct them to examine the maps of Pennsylvania and the United States.

a. After giving the students a minute to look over the maps, the teacher should start a discussion focusing on the following questions:

i. What generalization can they make about where support for women’s suffrage was strongest and where it was weakest?

ii. Why do they think that women’s suffrage had more support in the Western states than the Eastern States?

4. The teacher should project a side-by-side image of the map of Pennsylvania and the map of the United States.

a. What patterns are evident and how can they be explained?

5. In their pairs, students should examine the map showing the speaking tour taken by suffragists from the East. They should write down their answer to the following question and hand it in at the end of class

a. Do you think they would have had success persuading their western counterparts to vote against the Democrats based solely on the issue of woman suffrage?