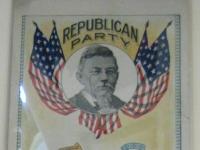 The Hidden Collections Initiative for Pennsylvania Small Archival Repositories (HCI-PSAR), a project of the Historical Society of Pennsylvania with funding from the Andrew W. Mellon Foundation, is uncovering the hundreds of hidden collections held by the many small archival repositories in the five-county Philadelphia area. Some of the collections cataloged in the HCI-PSAR project are summarized in this subject guide, which is designed to facilitate and encourage research at small repositories. The guide is not comprehensive but will serve to highlight underutilized collections and reveal the depth and breadth of resources available at small repositories.

Finding aids to all small repository archival collections surveyed in the HCI-PSAR project are available at our finding aid website, hosted by the Philadelphia Area Consortium of Special Collections Libraries. Finding aids are being added on an ongoing basis, so check back frequently.

Abraham R. McIlvaine correspondence, 1836-1857 (WTHC.07)
Wallace Township Archives
0.5 linear feet
Abraham Robinson McIlvaine (1804-1863) was a farmer and United States Congressman from Pennsylvania. In office from 1843-1849, he befriended future president Abraham Lincoln during Lincoln's only term in Congress. The Abraham R. McIlvaine correspondence, 1836-1857, consists entirely of incoming and outgoing letters between Abraham McIlvaine and various family members. There are 556 letters, spanning the time period during Abraham McIlvaine's career as a member of the Pennsylvania House of Representatives, a U.S. Congressman and chairman of the Committee on Expenditures in the Department of War, and his post-political life. At least some of McIlvaine's letters from 1843-1849 discuss his activities in Congress.

Fornance family papers, 1794-1989 (HSMC.46)
Historical Society of Montgomery County
26 linear feet
Joseph Fornance (1804-1852) was a Democratic member of the U.S. House of Representatives from Norristown, Pennsylvania. Like the elder Joseph, his son Joseph Fornance (1841-1923) and grandson Joseph Knox Fornance (1882-1965) were lawyers involved with politics. The Fornance family papers, 1794-1989, is an extensive collection of correspondence, ledgers, diaries, photograph albums, scrapbooks, and documents covering several generations of one family. Family members were involved in numerous matters over more than one-and-a-half centuries, so among other subjects, there is rich documentation of military service during the Civil War and World War I, the election of Woodrow Wilson, and early efforts at historic preservation (the Fornance family home is considered the oldest in Norristown).

Joseph E. Coleman papers, 1951-1994 [bulk 1968-1994] (AAMP.G94.019)
African American Museum in Philadelphia
8 linear feet
Joseph E. Coleman (1922-2000), a chemist and lawyer, was the first African-American president of Philadelphia [Pa.] City Council. Serving in this capacity for 12 years from 1980 to 1992, Coleman turned the council into a more independent legislative body with greater authority that almost equaled that of the mayor. The Joseph E. Coleman papers, 1951-1994 (bulk 1968-1994), consist of various materials, including drafts for speeches, articles, testimonies, photographs, correspondence, campaign ephemera, and scrapbooks that document Coleman's time as a Philadelphia politician, including his time as a councilman and council president. Also included are corrected typescript drafts of novels authored by Coleman, and reprints of his scientific publications and patents.

Thomas South papers, 1861-1914 (HST.09)
Historical Society of Tacony
16 linear feet
Thomas Winfield South (1847-1922) moved to Tacony, Philadelphia in 1872 to work for the Disston Saw Works as manager and land-agent for the Disston-owned properties. South was a prominent figure in the area who worked as Director of the Suburban Electric Company, as Magistrate at the Central Police Court, and as the Assistant Director of Public Safety under Mayor Weaver (1903-1907). South invested heavily in Florida real estate with a vision of developing the St. Petersburg area, although his plans were not realized until many years later. The Thomas South papers, 1861-1914, documents much of the working life of South and includes correspondence regarding his work as a magistrate and his dealings in the development of central Florida. There are legal records and registers from his time as a magistrate, as well as a large amount of court summons.

Subject Guide
Founding of Pennsylvania and the United States