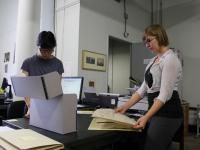 The Historical Society of Pennsylvania (HSP) and the Library Company of Philadelphia (LCP) jointly award approximately 25 one-month fellowships for research in residence in either or both collections during each academic year. Fellows hail from across the country and around the world, utilizing both institutions' collections in contemporary scholarship.