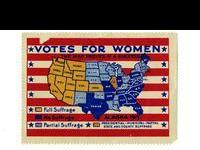 *This blog is the thirteenth in a series by Sarah Sharp, Global Educator for World Heritage Philadelphia.

As we consider the various dimensions of Philadelphia’s political life in the late 1800s and early 1900s, we find key local, state, and international activities related to suffrage in particular.  The fact that male voters across the country ratified the Nineteenth Amendment to the US Constitution in 1920, which guaranteed the right to vote to all citizens regardless of gender may be the most well-known event involving women’s roles in American political life in this era.  Yet, the story of that achievement has major local dimensions, too.  Susan B. Anthony (1820-1906) was in Philadelphia during the 1876 Centennial, working at the National Woman Suffrage Association (NWSA) headquarters.  Others, such as Rosie Gratz (1781-1869), Elizabeth Cady Stanton (1815-1902), Caroline Katzenstein (1888-1968), and Alice Paul (1885-1977) were all part of the suffrage campaign in the Philadelphia area for decades.  Dora Kelly Lewis (1882-192), among others were members of the Philadelphia Equal Franchise Society, and later, the National American Woman Suffrage Association (NAWSA).   Racial divides were part of story regarding suffrage efforts in terms of African Americans and Native Americans, nationally and in Philadelphia.  Not all white women supported Black women getting the vote.

Finally, we certainly see Philadelphia women’s concerns echoed in the international political realm in this era,  Several European countries celebrated the first International Women’s Day on March 19, 1911 lifting up women’s suffrage, work life concerns, and vocational training, among other matters.  Over 1,000 American and European women travelled to the first International Congress of Women, which occurred at The Hague on April 28, 1915.  Out of this gathering came the Women’s International League for Peace and Freedom ,which still has a presence in Philadelphia as well as elsewhere in the United States.  Numerous organizations and businesses commemorate International Women’s Day, as well as Women’s History Month each year in Philadelphia, including the National Constitution Center and the Historical Society of Pennsylvania.

Leila J. Rupp, Worlds of Women: The Making of an International Women’s Movement