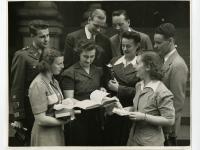 The summer is in full swing at HSP, and in archives that means we have welcomed two new interns into the ranks: Arek and Allison.  Both have been working hard on numerous projects, including updating our free space inventory and assisting Project Archivist Willhem Echevarria on collections he's processing for the NHPRC Civic Engagement Collections project.  They've also been hard at work inventorying and processing collections of their own.  Here's a rundown of those collections.  Links to the finding aids will be posted once their work is complete, but all these collections are currently open for research and can be found through our online catalog Discover.

Philadelphia Bureau of Unemployment Relief records, 1930-1933 (Collection 1585)
Allison recently finished doing a box-level inventory for this interesting collection from an organization that was founded to help local folks during the Great Depression.  The Bureau was formed in 1931 after the re-organization of another city committee, the Committee for Unemployment Relief.   Many in the city were extensively in need during this time, and the bureau resources were exhausted after only a few months.  Its work of providing financial relief was carried on, however, through charitable donations.  Ultimately though, due its inability to meet the demands of unemployed residents, the bureau permanently closed in 1932.  This collection contains mostly financial records of the bureau, but it also contains a few records from other organizations, such as the Clearing House for Homeless Men, Temporary Shelter for Homeless Men, and Emergency Aid.

Museum Council of Philadelphia records, 1939-1994 (Collection 2083)
The Museum Council of Philadelphia was founded in 1939 when a group of museum professionals got together with the idea of promoting Philadelphia and its cultural institutions.  They took their notions to the New York's World Fair, and they built upon them in the following decades.  In addition to serving as an umbrella organization dealing with promotion and cooperation among area museums, the council has also focused their efforts elsewhere, such as with artifact preservation during World War II.  Our intern Arek inventoried this medium-sized collection of the council's records, which dates back to its founding.  Among the papers, researchers will find meeting minutes, correspondence, programs, directories, calendars, financial records, and information on the council's history.

Chamber of Commerce of Philadelphia records, 1869-1971 (Collection 1997)
A couple years back, we had another intern work up a shelf list for this collection, which proved useful to staff and pagers.  This time round, Arek transcribed that shelflist into our database, arranged the collections volumes and boxes on the shelves, and added new box labels and volume numbers, to help make this collection a little more accessible.  The Chamber of Commerce of Greater Philadelphia was established in 1915 with the merger of the Trades League of Philadelphia and the Merchants and Manufacturers Association.  The Trades League of Philadelphia was incorporated in 1891 to promote trade and commerce in the city. Later, in 1942, the chamber merged with the Philadelphia Board of Trade.   This collection contains minutes from the Trades League, the Chamber of Commerce, and several special committees of the chamber. There is also correspondence, financial records, memoranda and other miscellaneous documents related to the chamber's work up to 1971.

Harrison family papers, 1789-1964 (Collection 2048)
The Harrison family Papers consists mainly of the papers of Mr. and Mrs. Charles Curtis Harrison Jr., and much of it relates to Mrs. Charles C. Harrison (Marie Louise Lemoine).  In particular, the collection contains Marie Lemoine Harrison's correspondence from 1894 to 1964 – a remarkable span.  It also contains incoming and outgoing letters from other family members, newspapers clippings (loose and in scrapbooks), diaries, photographs, papers from related families, and miscellaneous ephemera.  There already existed a box-level inventory and description on paper for this collection, which Allison checked against the current boxes.  She entered this list into our database and is in the process of merging two sets of description for the collection.

The projects that we give to our interns vary depending on their needs and the needs of our collection.  These four collections are examples of those that just needed a little more work to make them much more accessible.  We value the work our interns provide – they help us as much as we help them. The finding aids produced by Arek and Allison will be made available on our website and in our library later this summer.