Extended Beyond Fear: The Refugee Experience

Extended Beyond Fear: The Refugee Experience 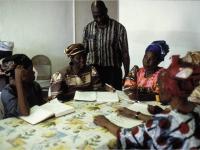 Refugees are very different from “voluntary” immigrants because they do not choose to leave their country.  They are forced to leave because of persecution due to race, religion, political opinion, nationality, or social group, and are resettled by the UN in countries like the United States. Since 1980, the United States has accepted refugees from the continent of Africa. The U.S. now accepts 18,000 from Africa annually.

Refugees may be resettled in places where they already have kin, under the “family reunification” provision, which explains the concentration of these populations here. The resettlement of the “Lost Boys of Sudan” in many parts of the U.S., including Philadelphia, is a special case. These young men arrived mostly as unaccompanied minors, and resettlement agencies have tried to respect the fictive family units that they formed in the Kakuma refugee camp in Kenya where most lived for years.

Refugees experience special challenges upon arriving in the United States. At the same time that they need to adapt to a new society, they are recovering from the trauma of war or persecution. They may be separated from their family members, or not even know where their family members are. Others have spent years in refugee camps under hard conditions before being resettled. These traumas can lead to problems in adaptation and feelings of resentment, sadness or depression. Refugees may also experience uncertainty about the future, since they do not know if conditions in their home country will permit them to go home one day.

Whether educated or not, refugees did not choose to leave their home countries like voluntary immigrants, and they may not be prepared, either professionally or psychologically, to integrate into American life and work. Many African community associations are trying to address these needs through offering job counseling, computer classes, and other support to newcomers.

Many refugees and asylees have the desire to return home should peace be restored. Their associations in Philadelphia may also take an active role in assisting people in their home countries.

For the time being, however, African refugees in Philadelphia live a dual existence: they attempt to rebuild their lives in the United States while keeping tabs on political developments at home. Their hopes are extended in many directions.