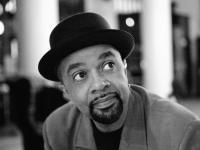 Performance tickets are $75 per person and includes the seated musical performance at 9:00 p.m., wine service, and dessert. Guests will also receive a special gift bag including tickets to view the exhibit American Treasures: Documenting the Nation’s Founding, a special collaboration between the Historical Society of Pennsylvania (HSP) and the National Constitution Center featuring unique working drafts that became the U.S. Constitution.

This year's Founder's Award dinner will be held on May 3, 2017, at the National Constitution Center. This year, HSP will honor National Book Award Winner James McBride with the Founder’s Award and HSP Board Member Alice L. George and Library Company of Philadelphia Director Emeritus John Van Horne with the Heritage Award.

James McBride is an author, musician, and screenwriter. His landmark memoir, The Color of Water, remained on The New York Times Best Sellers list for two years. It is considered an American classic and is read in schools and universities across the United States. His debut novel, Miracle at St. Anna, was adapted into a major motion picture directed by American film icon Spike Lee. It was released by Disney/Touchstone in September 2008. McBride wrote the script for Miracle at St. Anna, and co-wrote Spike Lee's 2012 Red Hook Summer. His latest novel, The Good Lord Bird, about American revolutionary John Brown, is the winner of the 2013 National Book Award for Fiction.

The annual gala will take place at the National Constitution Center beginning at 6 p.m. with a cocktail reception followed by a musical performance of the story of John Brown by James McBride and the Good Lord Bird Band, an awards ceremony, dinner, and an appeal auction by George McNeely.

HSP,  in partnership with the National Constitution Center, is unveiling American Treasures: Documenting the Nation’s Founding, an exhibit illuminating the founding era through priceless drafts of the U.S. Constitution, including Pennsylvania delegate James Wilson’s own handwritten drafts. Founder's Award attendees will have the opportunity to tour the new exhibit during the evening's celebrations. The exhibit will not be open to the public until May 4.

A sneak peek of the exhibit will be available to all attendees of this year's Founder's Award! The funds raised at this event go directly toward supporting HSP’s mission of inspiring individuals and organizations to create a better future through historical understanding.

The Event Chairs are J. Rudy Lewis and Dorothy Mather Ix. Gerry and Marguerite Lenfest are serving as Honorary Co-chairs.

About the Founder's Award

The Historical Society of Pennsylvania (HSP) seeks not only to enrich and maintain the historical record, but also to champion history’s uses and enhance its value to the public. As part of its 175th anniversary celebration, HSP established the Founder’s Award for Exemplary Service to History to recognize leaders in these causes. The medal was commissioned with the assistance of Lea Aspinwall Cadwalader, in memory of her husband John Cadwalader, a longtime HSP councilor. The face of the medal is based on Alexander Milne Calder’s model for the statue of William Penn atop Philadelphia’s City Hall.