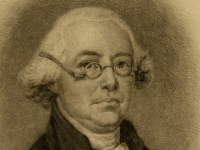 The Historical Society of Pennsylvania (HSP), in partnership with the National Constitution Center, is opening American Treasures: Documenting the Nation’s Founding, an exhibit illuminating the founding era through priceless drafts of the U.S. Constitution, including Pennsylvania delegate James Wilson’s own handwritten drafts.

The Wilson drafts, from the collections in the Historical Society of Pennsylvania, are among the most constitutionally significant documents in American history, showing the evolution of the Preamble of the Constitution from a document drafted in the name of the confederated states to one that recognized the sovereignty of “We the People of the United States.” Featuring an interactive component that will allow visitors to compare the evolving texts of the earliest drafts of the Constitution, the exhibit represents the National Constitution Center’s commitment to educate all American’s about the progress of liberty. The gallery will display rotating treasures from the collections of HSP and other lending institutions over the next ten years.

In addition to featuring rare documents from HSP, this new National Constitution Center exhibit includes a display of rare newspaper printings of the text of the Bill of Rights as it made its way through Congress, lent by philanthropist and Constitution Center Board Member David Rubenstein who provided generous support for the gallery’s creation. The drafts showcase how James Madison’s original proposals became the Constitution’s first 10 Amendments in 1791. The American Treasures exhibit, an addition to the National Constitution Center’s display of rare documents, will open on Thursday, May 4, 2017, in a new permanent exhibit gallery.

“Recent scholarship on Wilson’s handwritten drafts of the Constitution have led to new interpretations of the origins of the final document,” said Charles Cullen, Interim President and CEO of HSP. “These seminal documents have never been displayed together outside HSP, making this exhibit a rare opportunity for the public to view them, and beside other items emanating from them. We are proud to collaborate with the Constitution Center to share these treasures with Philadelphia and the world.”

American Treasures: Documenting the Nation’s Founding explores the drafting of the U.S. Constitution in 1787, highlighting the key proposals and significant compromises that influenced the early drafts and shaped the document’s final text. Visitors are introduced to the crucial figures who played a role in shaping the Constitution – from James Madison to James Wilson, America’s most important champion of popular sovereignty, or government by “We the People,” and Gouverneur Morris, often credited as the primary writer of the Constitution’s final text.

American Treasures also explores the battle to secure a Bill of Rights through rare newspaper prints from 1789. Visitors can follow along to see how the Bill of Rights changed from what James Madison originally proposed in the House of Representatives to the familiar Amendments that we know today.

The exhibit includes some of the most significant constitutional treasures in American history, tracing the origin of the new form of government created by the Framers here in Philadelphia during the summer of 1787. From the vast collections of HSP, these treasures include James Wilson’s Report of the Convention’s Resolutions, the first draft of what would become the Constitution; James Wilson’s Manuscript of the Committee of Detail Report, a priceless document written by Wilson himself while serving on the committee that created the next iteration of the Constitution’s text; and the Official Printing of the Constitution from September 17, 1787. All future printings of the U.S. Constitution originated from this broadside published by Philadelphia printers John Dunlap and David Claypoole.

About the National Constitution Center
The National Constitution Center in Philadelphia inspires citizenship as the only place where people across America and around the world can come together to learn about, debate, and celebrate the greatest vision of human freedom in history, the U.S. Constitution. A private, nonprofit organization, the Center serves as America’s leading platform for constitutional education and debate, fulfilling its Congressional charter “to disseminate information about the U.S. Constitution on a nonpartisan basis.” As the Museum of We the People, the Center brings the Constitution to life for visitors of all ages through interactive programs and exhibits. As America’s Town Hall, the Center brings the leading conservative and liberal thought leaders together to debate the Constitution on all media platforms. As a center for Civic Education, the Center delivers the best educational programs and online resources that inspire, excite, and engage citizens about the U.S. Constitution. For more information, call 215-409-6700 or visit constitutioncenter.org.

About the Historical Society of Pennsylvania
The Historical Society of Pennsylvania is a provider of education and information for the people of Philadelphia and beyond. With over 21 million documents—including manuscripts, graphics, and ephemera—HSP serves more than 4,000 on-site researchers annually and millions more around the globe who use its resources online. HSP offers extensive online resources including digital collections, curricular materials, and it hosts educator workshops, public programs and lectures throughout the year. HSP is also a chief center for the documentation and study of ethnic communities and immigrant experiences in the 20th-century, and one of the largest family history libraries in the nation. For more information, call 215-732-6200 or visit hsp.org

Founder's Award attendees will have the opportunity to tour the new exhibit during the evening's celebrations. The exhibit will not be open to the public until the following day, May 4.