A Pinch of History: Culinary Commotion at HSP

A Pinch of History: Culinary Commotion at HSP 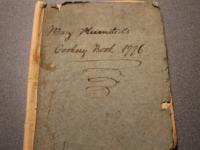 As a brand-new communications intern at the Historical Society of Pennsylvania, I was immediately faced with the challenge of choosing an historical topic to profile in a series of blog posts. How was I to select just one?; With over 21 million items covering 350 years of history here at HSP, there  are just too many amazing options!

During my interview for this position, I was shown Martha Washington’s Booke of Cookery and I quickly became emotional holding it in my hands. In this one item, two of my interests coalesced: my focus on colonial America in my studies at Temple and my most prominent hobby: cooking. So I decided to channel my love of cooking to help myself learn more about the lifestyles of those living in colonial America and the early United States. 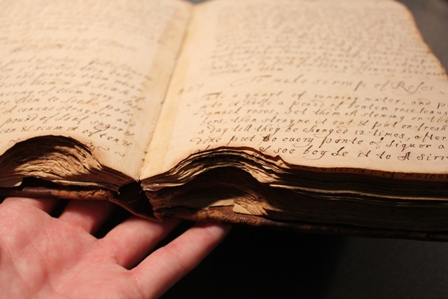 For this blog series, I have selected recipes from four different cookbooks in use during the 18th century.

• Martha Washington’s, of course (although it does contain a few recipes dating from the Elizabethan era)),
• Hannah Glasse’s The Art of Cookery, Made Plain and Easy; Which far exceeds any Thing of the Kind Yet Published,
• Amelia Simmons’s American Cookery
• The cookery books of Mrs. Mary Plumstead

My own cooking experiences from these colonial-era cookbooks will be featured in addition to research I’ve done along the way at HSP and in my studies at Temple. As a devoted foodie, I am eager to compare the things that I like to do with those of the foodies of eighteenth-century Philadelphia.

To say that preparing this blog was easy would be a lie. Going “behind the scenes” into HSP’s closed stacks and collection vaults, I paged these fragile sources from among the 21 million items here at HSP, while having to learn the archive’s organization system at the same time. Then came the hard-to-decipher cursive handwriting, obscure ingredients, and strange names for common dishes. 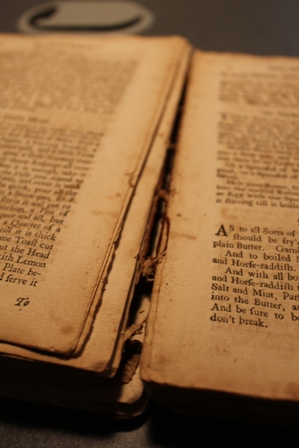 The importance of food in history is often overlooked, but is important to remember that in the past – as now - a majority of our social experiences are based around food or feature food in some way. This was especially true in Colonial Philadelphia, where tavern-going was a common practice among men of all social classes. It was to a tavern that the Founders most likely retired to following the First & Second Continental Congress meetings and the Constitutional Convention of 1787.

I know what my Italian family likes to eat together, so I was interested to learn what Philadelphians of the colonial era chose to gather around. It would be impossible to compare, as Italian-American cuisine is very different from the Western European cuisines that were prominent in the city in the eighteenth century. However, the foods themselves are important in their own unique respect. 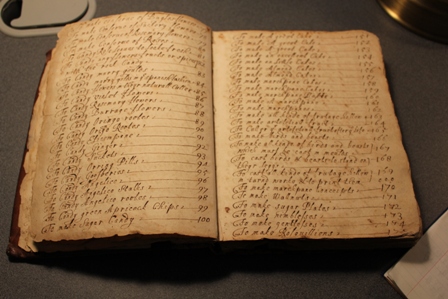 Please email me re: What is a Blog and how does one engage it.

Failing that, on coming to HSP would I be able to leaf through any or all of the books mentioned.

If so, would I need an appointment.

Thank you for the valuable reference!

Fascinating topic. I've studied some of these old books in the past, and have put myself, so to speak, in the kitchens of these ladies. Wood burning stoves, poor ventilation, food preservation and food safety issues, not to mention abundance or lack of ingredients. Keep you comments coming.