Marbled Papers in the Bank of North America collection

Marbled Papers in the Bank of North America collection 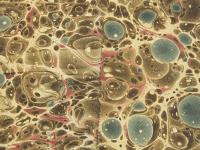 The project conservation team has been busy photographing each of the hundreds of volumes in the Bank of North America collection. In the process we have created a sizeable collection of decorated papers present in these volumes, either as endsheets or exterior covering. Most of these were created using a process known as marbling, although some books contain paste papers as well.

Forms of marbling have been documented in China, Japan and the Middle East prior to the 12th century. Japanese Suminagashi involves the use of sumi inks and it is still a popular paper marbling style. The Turkish Ebru style was first introduced to France, Italy and Germany and craftsmen continued to introduce a wide range of materials and techniques. A Western marbled paper was created by floating a sizing such as carageenan on the surface of a water bath, followed by pigments in the desired sequence and a surfactant such as ox gall. This layer could be manipulated with a variety of tools and motions as well as added chemicals. An alum treated paper was laid on top and gently pulled away to create an impression.

Marbled paper styles may be roughly classified by technique although the variety of the practice ensures dispute. To identify these I relied mostly on the nomenclature established by Richard J. Wolfe in Marbled paper: Its history, techniques, and patterns. With special reference to the relationship of marbling to bookbinding in Europe and the Western world . Philadelphia: University of Pennsylvania Press, 1990.

Below is an example of the Nonpareil pattern ("unparalleled" in French), formed with the use of an evenly spaced comb dragged through the pigment layer. 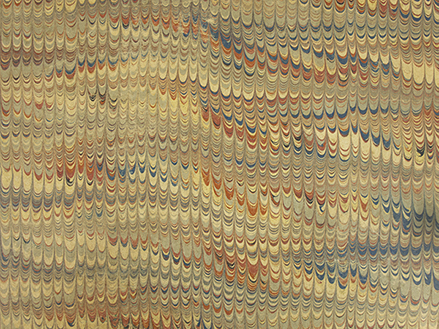 The Shell pattern below was created by mixing the last color to be added to the bath with oil, producinng the characteristic dark centered and white outlined color spots. 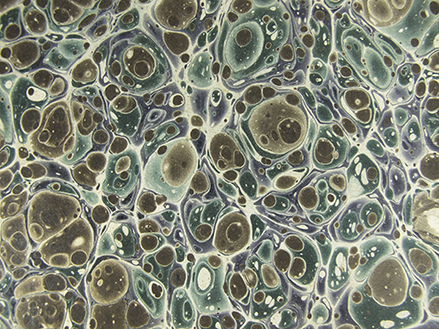 This Schrottel pattern's pebbly look was achieved by the addition of an oil and ox gall mixture to a Turkish color base. 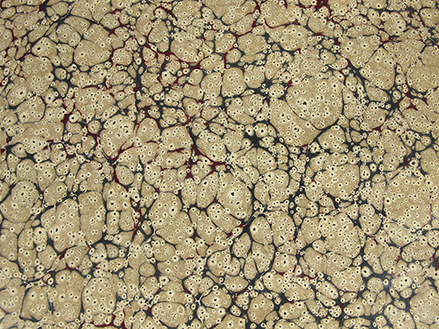 The Italian pattern is meant to resemble actual marble stone and the thin veins of color between wide open spaces are created by adding a disperant to the bath after the initial colors. This may have been a combination of soap, spirits and ox gall. In addition, the bath was physically manipulated to create the gradated waves characteristic of the Spanish style,  an innovation that may or may not have originated with the shaky hands of a marbling craftsman nursing a hangover. 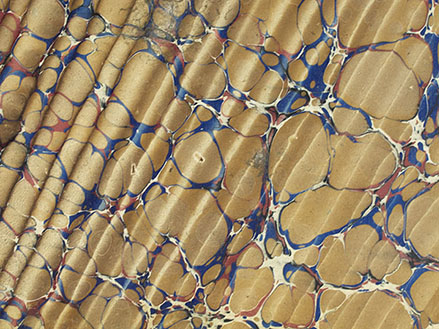 The Spanish moiré pattern is a variation that involved folding the paper diagonally first before laying it on the bath and rocking it with repeated motions. This particular paper was possibly double printed, with a gold vein pattern followed by the final Spanish moiré. 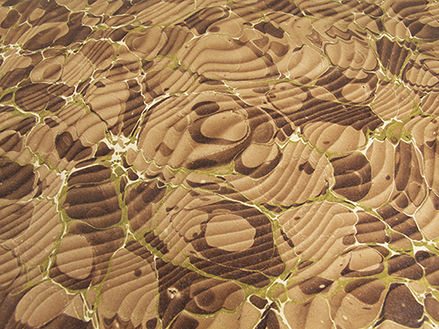 The open white lacing of the Stormont pattern below was achieved with the final addition of turpentine or some other dispersant to the bath. 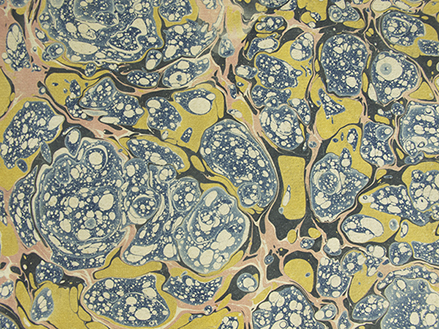 Marbling on printed text occured occasionally as the craftsman reached for whatever paper was available and several volumes in the Bank of North America collection sport such endsheets. This one is a portion of the biography of De Witt Clinton, 1769-1828, the New York politician known as "the father of the Erie Canal". 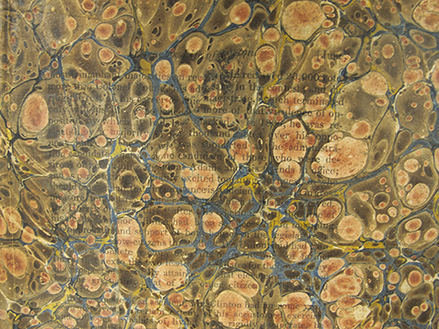 HSP holds a copy of this 1829 publication: Memoir of De Witt Clinton: with an appendix, containing numerous documents, illustrative of the principal events of his life by David Hosack

More images of the marbled and paste papers of the Bank of North America collection can be seen in this set on the Historical Society of Pennsylvania's flickr page.

What a wonderful undertaking to research and document the endpapers in the volumes of this collection. I'm looking forward to more blog posts from the conservation team.