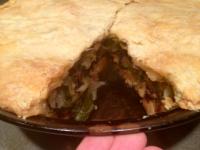 If George Washington can be considered the father of our nation, then his wife, Martha, could be considered its mother. Although Martha received the cookbook from the mother of her first husband, Daniel Custis, Martha undoubtedly cooked some of the recipes for Mr. Washington. The book was then inherited by her granddaughter, Eleanor Parke Custis. George Washington has no direct descendants. 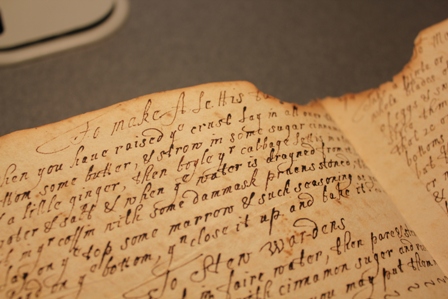 This cookbook fascinated me from the moment I set eyes upon it during my first interview at HSP. I was even more intrigued—and occasionally slightly repulsed—after beginning to read it. Although most of the recipes are things that I would not consume (and I would say I am adventurous with my food tastes), I felt it was important to see just how differently our tastes have developed in only a few centuries. The colonial palette – just like today’s – was influenced by the availability of ingredients, prevailing ideas about health and nutrition, and new culinary methods resulting from changes in food preparation. Mrs. Washington would think I am so spoiled with my pre-ground spices and prepared sticks of butter… not to mention my food processor, indoor grill, and especially microwave.

Through my research, I’ve gained a newfound respect for of prior generations who were able to create intricate meals without the technology available to cooks today.
For this culinary adventure, I used a generic pie crust recipe from the Internet, as the 18th century recipes were very difficult to understand. Instead, I wanted the contents of this pie to be the highlight of the recipe. As I am breaking a sweat trying to cut the two sticks of butter into the flour and sugar for the crust, I could not help but realize that the women of Mrs. Washington’s time most likely churned their butter first before they went through the same process. I then rolled the dough & put it in the refrigerator to harden, the refrigerator being another innovation not yet available in the 18th century. Boiling the lettuce, chopping the prunes, and assembling the pie took almost an hour. Baking took close to an hour, as well. The time and effort women throughout history put into providing for their families is not nearly appreciated enough. 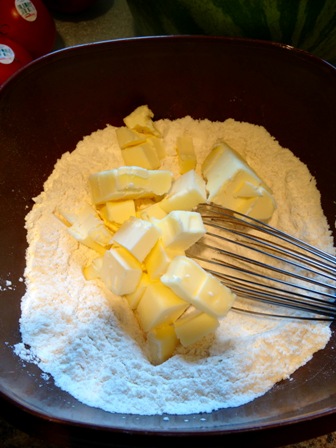 The eighteenth century diet may have contained many ingredients viewed as unhealthy today, like lard and copious amounts of eggs & butter, but they had an advantage over us: food then was not processed, chemically altered, infused with excess nutrients, or treated with pesticides in the growth process. Hannah Glasse and Amelia Simmons, who published their cookbooks in print, give extensive guidelines for choosing the best quality ingredients in accordance with seasonality and location. The dishes may not have been calorie-friendly, but they were of utmost quality and freshness.

This pie tasted much better than it sounds. Called a “lettis tart”, I was slightly confused when I saw the recipe also called for prunes. I wanted to try something completely weird by today’s tastes. I would not have been as successful with this recipe had Karen Hess not transcribed Mrs. Washington’s cookbook and provided important insight and details to help a modern cook recreate the same dishes.

Prunes taste much better baked in a lettuce pie than they smell out of the bag. This dish is almost like a salad pie… Except the thick, buttery crust defeats the purpose of the salad. The people of the 18th century were not as concerned with maintaining their waistlines. Or rather a thin waistline was not necessarily desirable in a woman – perceptions of beauty, like preferences of certain foods, are always changing.

For the crust (which Martha calls a “coffin”):

1. Combine the flour, sugar, and salt in a large mixing bowl
2. Add the butter cubes to the dry ingredients and cut it using a pastry cutter (I did not have one on hand so I rubbed the cubes between my fingertips and it worked just as well) until the butter pieces are no larger than a dime
3. Drizzle in the water and work the mixture into a dough using a rubber spatula until it is cohesive
4. Knead your dough no more than 10 times to form a ball
5. Divide the ball in half, wrap each separately in plastic wrap, and refrigerate for at least an hour so that the water can be absorbed, making the dough even more cohesive 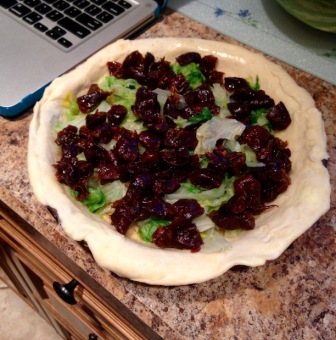 1. Preheat the oven to 350 degrees Fahrenheit
2. Place prunes in a bowl, cover with water, and soak for at least one hour
3. Once the dough is chilled, roll each dough ball into a disk
4. Spray a pie plate with cooking spray; place one dough circle into the plate and press around into the bottom edge of the pie plate
5. Bring a large pot of water to a boil; add the lettuce leaves and stir until wilted
6. Roughly chop the prunes into bite-sized pieces
7. Brush melted butter on the bottom inside of the pie crust; sprinkle some ginger, cinnamon, and sugar
8. Fill with a layer of lettuce, all of the prunes, then another layer of lettuce
9. Sprinkle more cinnamon, ginger, and sugar
10. Cover with top pie crust and adhere the sides together using a fork; remove any excess dough hanging over the edge
11. Brush more melted butter across the top of the pie crust
12. Place a cookie sheet in one of the lower shelves to catch an liquids that are expelled during the baking process
13. Bake the pie for 45 minutes or until the crust is browned (mine took almost an hour)
14. Allow to fully cool before slicing 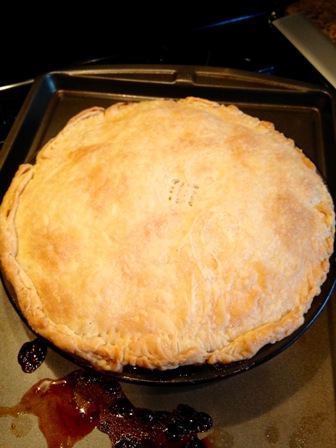 You are to be commended for this project.
There are so many varieties of lettuce. Iceburg lettuce which is the most bland was developed after Martha's time.
My mother-in-law (born 1895) when talking about prunes often meant a particular type of plum. She also would mention that there is a difference between spring wheat and fall wheat. One is for pies and cakes and the other for breads.
There is a world of difference between lard made from slaughtering your own pig and store bought.
For more information about crops and foods from Martha's time you must go to www.goschenhoppen.org.
Their Folk Festival is Aug.7th and 8th this year. They have a heirloom garden. Volunteers, dress in authentic costumes of the period using authentic tools in recreating home skills, trades, pastimes, food and folk music. An event for the entire family.