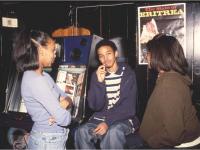 African immigrant children – those who were either born in Philadelphia or arrived here at a young age – face many challenges while growing up. They notice the differences between their own immigrant households and that of their American peers – their family eats differently, speaks differently, and socializes differently – and may feel self-conscious about this.

Adapting more quickly to the new society, children may be called upon to help their parents understand American life or language. This leads to a reversal in traditional patterns of authority that makes everyone feel uncomfortable. Since their parents may be unfamiliar with the role families are expected to play in their children's education by schools and teachers, younger Africans may receive less educational support than their American peers. And parents may also have little understanding of the psychological distress their children experience in adolescence when “growing pains” are intensified by concerns about cultural identity and belonging.

Many African parents expect to raise their children as they themselves were raised, often disregarding the different social and cultural context in which they now find themselves. This gives rise to frustration or rebellion on the part of the younger generation. Some refugee children may even make a concerted choice to leave their "African-ness" behind as part of an attempt to forget the often traumatic events they have experienced in Africa before arriving in the United States.

Despite the separation they feel from Africa and its traditions, younger generation Africans do feel that they are different from their American peers. They enjoy their knowledge of two cultures, and feel that they have greater options about where and how they will live their adult lives. They interact well in mixed generational groups, which is the norm for their community gatherings. And they tend to have a respect for their elders which is uncommon in our American, youth-oriented society.

Most African families try to strike a balance in raising their children in the U.S. They wish their children to succeed according to the American model but hope to instill in them an appreciation of the home culture. This sense of "who they are" is something that many younger Africans in Philadelphia seem to have. It will be interesting to see where they ultimately choose to live.