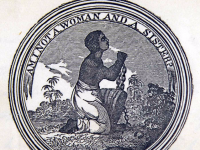 PHILADELPHIA, PA - The Historical Society of Pennsylvania is pleased to announce the addition of a new database to the HSP Encounters system: Manumissions and Indentures (1773-1865). This database contains information taken from selected documents contained in Series IV of the Pennsylvania Abolition Society papers (#0490), manumissions, indentures, and other legal papers.

To genealogists, family historians, and scholars, these new records are a boon for historical research into the experiences of African Americans in the 18th and 19th century.

With these new additions, the HSP Encounters system-wide record count now numbers over 420,000.

Access to HSP Encounters is available to all on-site researchers at HSP. Remote access is available as a benefit for Friends of HSP. Already a Friend of HSP? Begin your search here.

The records in Series IV reflect one of the Abolition Society's key early missions: to provide legal assistance to slaves, former slaves, free blacks, free mulattos and others to insure their status was protected, especially as it was affected by the Pennsylvania law for the gradual abolition of slavery (1780). These protections often took the form of legally binding agreements such as manumissions, where a master formally released a slave from servitude, or an indenture, where a free person or their guardian agreed to a specific term of apprenticeship or servitude in exchange for benefits provided by the master.

The bulk of the documents abstracted to date are individual indentures. They typically start as pre-printed forms that provide standard legal boilerplate to which are added hand-written specifics that provide the names of the parties, their residences, their roles, the age and race of the person being indentured, the date and term of the indenture, the occupation to be taught, other education to be provided, and compensation to be provided at the indenture’s completion. Sometimes, later changes to the indenture terms will be added, such as transfers to other parties or early termination of the agreement. For children, an indenture often provides the names of one or both parents or close relations in their roles as legal guardians granting their consent. Members of the Abolition Society are often signatories as well in their role as advocates.

HSP Encounters is a digital resource comprised of an ever-growing number of genealogical and biographical databases. Historical essays incorporated in the system describe each database, as well as providing historical context for the records it contains.

As of today, there are twelve databases available for research. The project is ongoing, with HSP staff identifying new records and materials to digitize and make available online in searchable form.

Current databases available for research include:

Access to HSP Encounters is available to all on-site researchers at HSP. Remote access is available as a benefit for Friends of HSP. Already a Friend of HSP? Begin your search here.